After a slow start due to cool and rainy weather, the recent hot weather has brought the Japanese beetles out of the ground.  Last year the first Japanese beetles of the season were reported the first week on June. This year it was the last week of June, and emergence in some areas continues to be slow.

So far the emergence of the bright green and coppery-brown adult beetles has been very spotty based on calls and email messages this week.  While some people are wondering why they have fewer beetles than in the past, others are noticing many more (worst ever!!). This has been our experience with JB since its first documented presence in Iowa back in 1994.  Some people have none, some have a few and some have millions.  Each year is different and populations vary greatly from place to place.
Protecting trees, shrubs, flowers and fruits during a JB explosion is challenging.  Various actions will help, but there is no silver bullet that will solve the pest problem.
One option is to tolerate the damage.  Brown, defoliated trees such as lindens and crabapples look unsightly but the trees are not killed; they will recover.  Handpicking or screening of high-value plants may work if you have a few small plants or a limited number of beetles.   Spraying infested foliage of high value plants is the last resort at this time.  Common yard and garden insecticides work, but only for a few days.  Multiple applications are required to maintain control over the period of several weeks while new adults continue to emerge.  Systemic applied to the soil for control of JB on trees must be applied in advance of the arrival of the beetles.
Controlling Japanese beetles with insecticides on fruit crops that are being harvested, such as raspberries, is especially challenging.  Insecticides such as Sevin that provide control cannot be applied within 7 days of harvest.  Shorter Pre-Harvest-Interval insecticides that are available but may require more frequent application (pyrethrin – 0 days; Surround – 0 days; Neem – 0 days; malathion - 1 day).
Traps sold to capture adults will catch hundreds to thousands of beetles out of millions that may be present.  Traps may contribute to increased plant defoliation because traps attract more beetles than they catch.  Use of traps is not recommended except for the emotional satisfaction of seeing and smelling thousands of dead beetles.
Japanese beetle has been reported in 61 counties.  The distribution map below shows where Japanese beetles have been reported to us through the end of last year.  Please send specimens or photos to confirm new county records for our map. 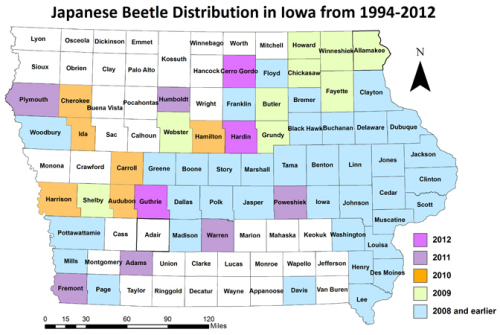 Links to this article are strongly encouraged, and this article may be republished without further permission if published as written and if credit is given to the author, Horticulture and Home Pest News, and Iowa State University Extension and Outreach. If this article is to be used in any other manner, permission from the author is required. This article was originally published on July 12, 2013. The information contained within may not be the most current and accurate depending on when it is accessed.