One of the many "curiosity" insects in Iowa is the black vine weevil.  To be sure, this is a rare insect in Iowa and one that most Iowans will never get to see.  Part of the fascination with this insect for me is that it was the first insect I identified when I started as Extension Entomologist 3.6 decades ago.  A specimen was on the desk waiting for me when I came to work on my first day at ISU.

There have been only a handful of specimens since!  But another one came in this past week (digitally this time, and not preserved in a glass vial).  These specimens from Howard County were found inside a home, as have all of the previous samples but one.  The sample from Howard County is a new county record, bringing the total number of counties where black vine weevil has been reported in Iowa to 11, after a 10th county was added two years ago.  See HHPN from March 9, 2011.

The black vine weevil is a plant-feeding pest on yews, rhododendrons and others.  Adults feed on the foliage, but more importantly, larvae feed on the roots.   The weevils move with infested nursery stock and when present in an area make themselves known as household accidental invaders that wander indoors from infested plants.  The wandering adults are harmless and need only be swept or vacuumed up and discarded. 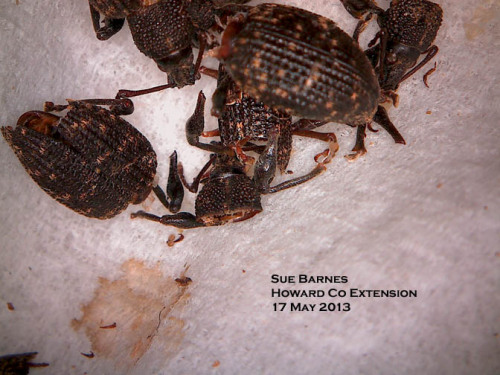 Black vine weevil pieces found indoors. The broad snout, elbowed antennae and patches of yellow hair are visible, though not all on the same specimen. 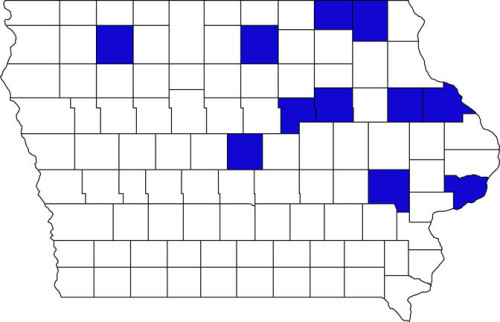 Links to this article are strongly encouraged, and this article may be republished without further permission if published as written and if credit is given to the author, Horticulture and Home Pest News, and Iowa State University Extension and Outreach. If this article is to be used in any other manner, permission from the author is required. This article was originally published on May 24, 2013. The information contained within may not be the most current and accurate depending on when it is accessed.