2012 update on Bur Oak Blight and a Potential Fungicide Treatment

By Tom Harrington, Department of Plant Pathology and Microbiology

Our work at ISU, supported by the US Forest Service, indicates that a rainy period during spring budbreak is critical for BOB symptoms in late summer. We had sufficient spring rains in 2011 and 2012 to maintain the elevated BOB levels that we have been seeing for the last decade.

If there are a couple of rainy days when new shoots are expanding in spring, the fungus that causes BOB may infect the leaves but grows very slowly, and the leaves remain symptomless for two or more months. A healthy-appearing bur oak may be suddenly full of dead leaves in August. The killed leaves that hang on branches through winter provide the spores for the next spring's infections (see picture below). We may need a couple of dry springs in a row to break the BOB cycle.

We have had some success with experimental root injections of fungicides in late May or early June, after the leaves have fully expanded but before BOB symptoms develop. However, fungicides at even modest rates may cause some leaf browning and twig death in bur oak. A single propiconazole injection following the recipe for oak wilt treatment may reduce BOB symptoms for two or more seasons. Trees should not be injected again until the spring following the reappearance of moderate to severe symptoms.

We recently described the fungus that causes BOB as Tubakia iowensis, recognizing that the pathogen is native here. The disease is widespread in Iowa and Minnesota and extends into neighboring states, roughly coinciding with the distribution of a unique variety of bur oak, Quercus macrocarpa var. oliviformis. This variety has relatively small acorns and is especially adapted to upland sites with shallow soils. Open, savannah forests of this variety of bur oak were common in the Upper Midwest before fire exclusion, and BOB is often most severe on large relics from these savannah forests.

Even in the most severely affected groves, most bur oak trees are resistant to BOB and do not warrant fungicide treatment. Even untreated trees with severe symptoms will likely produce a new crop of green leaves the next spring. However, several consecutive years of severe BOB may weaken the tree. We have seen some BOB trees die, usually as their branches are attacked and killed by a native wood borer, the two-lined chestnut borer, which attacks weakened trees. Removing dead oak trees and large, dead branches may help reduce populations of wood borers, which may slow the decline of trees showing severe BOB symptoms. But fungicide injections are the only proven control method, and they do not always work. 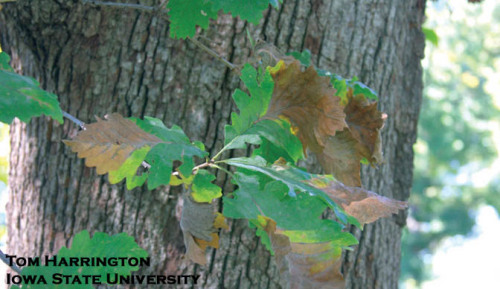 Picture 1. BOB leaf symptoms of necrosis (death) of the tissue along the veins. Photo by Tom Harrington. 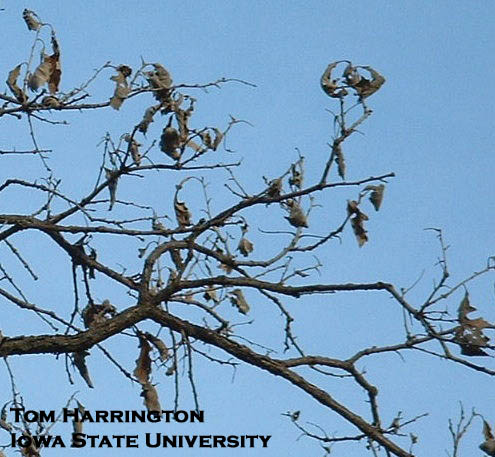 Links to this article are strongly encouraged, and this article may be republished without further permission if published as written and if credit is given to the author, Horticulture and Home Pest News, and Iowa State University Extension and Outreach. If this article is to be used in any other manner, permission from the author is required. This article was originally published on September 12, 2012. The information contained within may not be the most current and accurate depending on when it is accessed.