Springtails Can Be a Tiny Nuisance

Springtails have been a nuisance to many Iowans lately. These tiny insects (1/16 to 1/8 inch long) have an uncanny ability to get indoors. Luckily springtails are harmless, but when coming indoors in large numbers they can be annoying.

There are many species of springtails and they are among the most numerous insects on earth. They feed on algae, fungi, and decaying vegetable matter and thus are especially abundant in moist locations. Populations as high as 100,000 individuals per square yard have been documented in outdoor ecosystems. Many species of springtails have a specialized ‘tail’ that they can use to jump. See photo below.  Springtails are often mistaken for fleas because of their jumping ability.

Springtails thrive in moist areas, such as under mulch, rock, woodpiles and leaf litter.  Many areas in and around homes and landscapes make ideal habitats for them, but they also occur basically everywhere. During the spring and fall we get the most reports of springtails accidentally coming indoors. It seems during these times of the year the springtails maybe be moving around more. If they get indoors they usually die quickly and they will not infest food or harm anything in the house.

Preventing springtails from getting indoors is usually not easy, so if you can put up with them for the few weeks they are active it might be the easiest solution.  Spraying inside is usually not advised, however, spraying outdoors to reduce the number of accidental invaders can sometimes be effective.   However, before treating around the house all mulch needs to be raked back at least two feet all around the foundation in order for the chemical to reach the areas where the springtails are living and also because wood mulch absorbs all the chemical and prevents it from penetrating to the soil. In some cases the whole lawn has to be treated in order for an appreciable reduction in the numbers of springtails getting indoors. 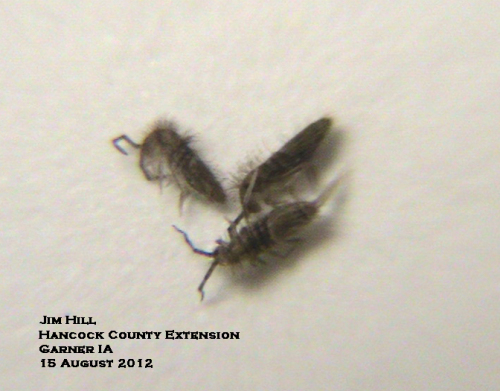 Springtails jump by using a spring-loaded, forked tail attached to the underside of the abdomen (hence the common name!).

Links to this article are strongly encouraged, and this article may be republished without further permission if published as written and if credit is given to the author, Horticulture and Home Pest News, and Iowa State University Extension and Outreach. If this article is to be used in any other manner, permission from the author is required. This article was originally published on August 15, 2012. The information contained within may not be the most current and accurate depending on when it is accessed.