The Return of the Boxelder Bugs

By Donald Lewis, Department of Entomlogy

The number of calls and messages received already about boxelder bugs and the number of bugs reported is not a good sign.

The weather this year has been ideal for creating a boxelder bug outbreak of epic proportions. In the past we could expect significant boxelder bug populations when it was warm in May and dry in July. This year both conditions existed to excess. I suspect we should brace for an onslaught of boxelder bugs and boxelder bug complaints.

Calls and specimens received so far have been about boxelder bug nymphs and not the more easily-recognized adults. Both adults and nymphs (immatures) have bright red abdomens.  The red abdomen is concealed under the black wings in the adult stage, making the adult appear dark in color. The nymphs do not have wings to cover the bright red abdomen. See the photos below.

Life Cycle: Boxelder bug adults that stayed outdoors and successfully hibernated through last winter returned to the trees to lay eggs for an early summer generation. This new generation grew up and reproduced in July to produce the nymphs we see now and the adults that will be a pest this coming fall.

I don't know why boxelder bug nymphs scatter to so many different locations.   People have reported them in flower beds, lawns, patios, sidewalks, gardens and everywhere else in the landscape. I've learned to not be surprised when people call about pointy, bright red insects in the landscape. The book says they live in the trees where they feed on sap from twigs and seeds. It's obvious they are also other places, but as far as I can tell, they are not a pest and they cause no damage to host plants.

There has not been a miracle cure for boxelder bugs for the past 75 years. There is not likely to be one, now. Insecticidal soap and soapy water sprays can be applied to the congregating nymphs on the house or tree trunk for knockdown and control, but frequent reapplication will be needed to feel like you are making any headway as more keep arriving from the nearby trees (all kinds of trees and not just boxelder trees). 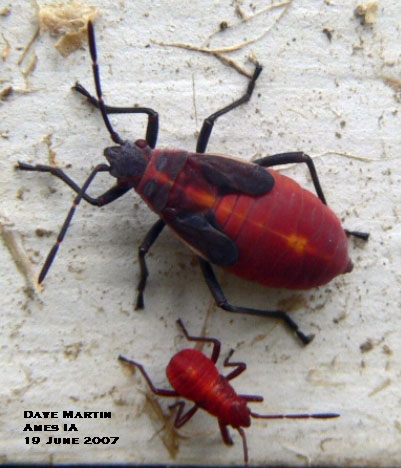 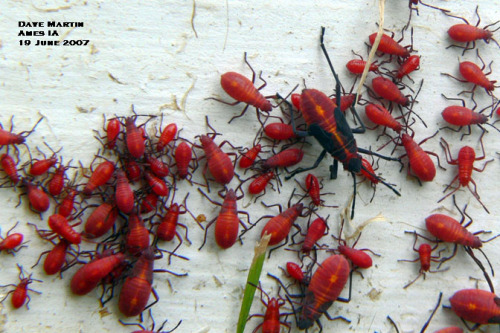 Links to this article are strongly encouraged, and this article may be republished without further permission if published as written and if credit is given to the author, Horticulture and Home Pest News, and Iowa State University Extension and Outreach. If this article is to be used in any other manner, permission from the author is required. This article was originally published on July 25, 2012. The information contained within may not be the most current and accurate depending on when it is accessed.