Wasps Are Not So Bad

It seems a bit early this year (as everything is), but wasps are becoming very noticeable. We  group wasps into 2 major categories: social wasps and solitary wasps.

Common social wasps in Iowa are yellowjackets, paper wasps and baldfaced hornets. Social wasps have a colony with a queen and workers that help raise more wasps. All the workers are sterile females. At the end of the season the wasp colony produces new queens and kings.  The male wasp mates with the queen and dies. The mated new queens overwinter and the workers and the old queen die in the fall. Each spring a whole new colony is started by a single queen. This is why often we do not notice social wasps until later in the summer; it takes a while for the colony to build up noticeable numbers.

In solitary wasps each female who makes her own nest and provisions it with food for the young. Solitary wasps do not have worker wasps to help; the female does it all herself and her young often overwinter as larvae or pupae. When they emerge the next spring the females mate with male wasps and start their own new colony. There are many species of solitary wasps in Iowa; some commonly observed ones include the cicada killers, spider wasps, and thread-waisted wasps.

Only female wasps are able to sting as the males lack stingers. In most cases wasp males do not survive very long past mating. Social wasps tend to be more aggressive if you are very close to their colony because the workers are expendable and protecting the queen. In Iowa the yellowjackets are probably most likely to sting and often people get stung when they inadvertently mow over their ground nests. Yellowjackets are cavity nesters and often form colonies in old rodent burrows and even the walls of homes.

Solitary wasps will generally only sting if directly handled, but they can cause concern if there are many nests in an area. Cicada killers are a solitary wasp, but as they are one of the largest wasps in Iowa people fear the sting matches the size of the wasps (it does not). Although solitary wasps do not form a colony with a queen it is common for many females to nest in an area. This year we have gotten some calls about solitary wasps nest in playground sand. This is always a difficult problem to solve as we do not like to recommend insecticidal dusts be used in areas where children will be playing. Often they are under slides or in an area not commonly disturbed, so if insecticides are used we recommend roping off the area to prevent access. The other option is to place a tarp over the area for several days to try to encourage the wasps to abandon the nests. If possible a long term solution is to replace sand with mulch. 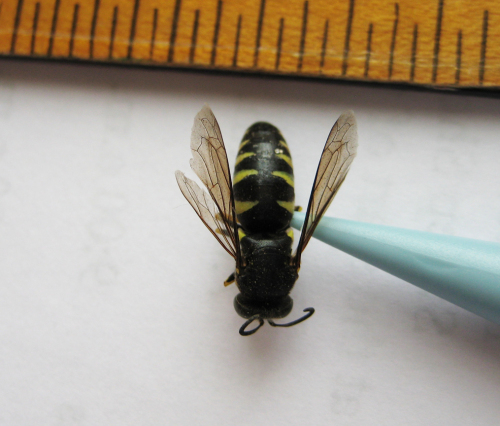 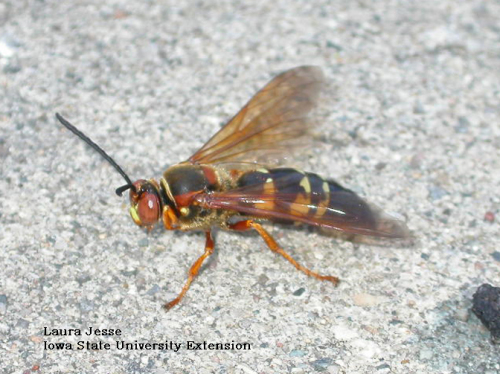 Links to this article are strongly encouraged, and this article may be republished without further permission if published as written and if credit is given to the author, Horticulture and Home Pest News, and Iowa State University Extension and Outreach. If this article is to be used in any other manner, permission from the author is required. This article was originally published on July 11, 2012. The information contained within may not be the most current and accurate depending on when it is accessed.