Keep an Eye Out for the Zebra Swallowtail

The zebra swallowtail butterfly (Eurytides marcellus) is one of six species of swallowtails found in Iowa. While you are much more likely to find them in the southeastern part of the United States, they are occasionally spotted in Iowa, particularly in years when there are higher than normal populations in the southeast. Sightings in Iowa are typically in the southern part of the state but, this year I have heard a couple of accounts of them being spotted in central Iowa. It is very likely zebra swallowtails are flying around other parts of the state, but those sightings are not being reported anywhere. If you happen to see an individual and would like to submit your sighting, you can do so at www.butterfliesandmoths.org.

As caterpillars zebra swallowtails feed exclusively on pawpaw, a shrub in the genus Asimina. According to the USDA NRCS distribution maps, the one species of pawpaw found in Iowa is A. triloba. While pawpaw is considered native to the state, it’s currently found more in the southern part of the state. Even though the caterpillar of the zebra swallowtail uses pawpaw as a host plant, the feeding that is done does not typically harm the shrub drastically, so they are not typically considered pests.

Pawpaw is hardy in Iowa and can do well across most of the state. By planting a pawpaw in your yard you increase the odds that one day you might just see a zebra swallowtail. The zebra swallowtail is an amazing species to see in flight, if you are lucky enough to come across one. 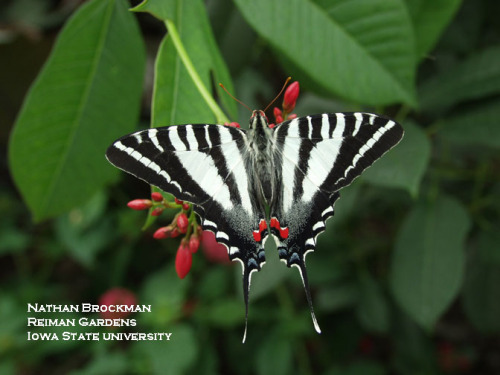 The zebra swallowtail butterfly is aptly named with its black and white stripes.

Links to this article are strongly encouraged, and this article may be republished without further permission if published as written and if credit is given to the author, Horticulture and Home Pest News, and Iowa State University Extension and Outreach. If this article is to be used in any other manner, permission from the author is required. This article was originally published on July 11, 2012. The information contained within may not be the most current and accurate depending on when it is accessed.