There has been a lot of talk this spring about the early arrival and outstanding numbers of the red admiral butterfly (Vanessa atalanta) seen around the state. Annual butterfly populations, or in a greater sense, annual insect populations, can vary greatly from year to year due to a variety of factors. The red admiral is a migratory species, so each spring the timing and size of the first brood observed in Iowa is affected by the winter weather conditions in the southern states. This year the relatively mild winter and unseasonably warm early spring conditions in a large portion of the southern states stretching into the Midwest, laid the foundation for the population we are currently observing.

In the South the red admiral is a continuously brooded and a multivoltine species, which means there are multiple generations each year and as long as the weather conditions are appropriate, they don’t go in to a full diapause (hibernation). With the mild winter weather conditions this year, not only were the southern populations able to continue producing additional broods, but more of the individuals that attempted to overwinter in more northern locations were able to survive the winter as well. These two elements combined meant that when it was time for the northward migration, there was a higher than normal population of individuals up for the challenge.

On top of the mild winter, the early spring was exceptionally warmer than normal. These warm temperatures allowed for the initial migration north to take place significantly earlier than it normally would. The warm spring condition was also evident in the plant communities and early bloom times of many of the spring flowers. These early spring flowers were important as they provided the nectar which sustains the red admiral adults.

The big question now is whether the populations of red admirals will remain high all season long. There are many factors to consider, both large and small, when trying to predict what might happen. If for instance we were to have a late snow storm, which at this point is highly unlikely, it would wipe out most of the individuals that have taken up residency in Iowa. Normally host plant availability over time would be a factor in the sustainability of a population of this size, but since the larvae feed on plants in the nettle family (Urticacea) availability should not be a problem. 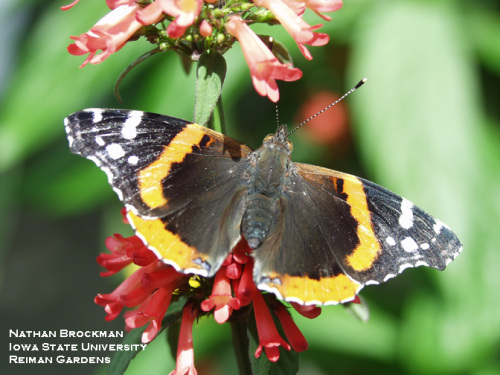 The red admiral butterfly has been more abundant and earlier than usual in Iowa this year.

Links to this article are strongly encouraged, and this article may be republished without further permission if published as written and if credit is given to the author, Horticulture and Home Pest News, and Iowa State University Extension and Outreach. If this article is to be used in any other manner, permission from the author is required. This article was originally published on May 2, 2012. The information contained within may not be the most current and accurate depending on when it is accessed.