There are three major groups of wood boring beetles; the longhorned beetles, the metallic woodboring beetles, and the bark beetles. The longhorned beetles and metallic woodboring beetles have similar-appearing larvae that feed either on cambial tissue right under the bark or throughout the interior wood. Bark beetles are small beetles with smaller larvae, but they can attack a tree in large numbers. They usually feed under the bark on the cambial tissue leaving characteristic galleries.

Woodboring insects are often blamed for killing trees because the borers and/or the adult exit holes are first noticed during close inspection of a dying tree. However, in Iowa, where we are dealing primarily with native insect borers, the insects came after the tree was already stressed and probably in decline. Insect exit holes are various sizes and are circular, oval or D-shaped. The exit holes are very clean – as if someone literally used a drill to make holes into the tree.

Insect borers like stressed trees. Larvae have a better chance of survival in a stressed tree because the tree cannot put up the defenses found in a healthy tree. Trees do not have an immune system like ours, but they do have amazing ways to determine when insects are feeding on them and they can produce compounds to stop the feeding. There is lots of research and information available on plant defenses. For more information on plant defenses and an interesting video see the Science Daily website for September 1, 2007.

Plants that are not healthy are not as good at recognizing insect feeding and responding to it, so female beetles looking for good places to lay their eggs are very good at recognizing a tree that is under stress. Of course the larval feeding further stresses the tree, but the beetles came after whatever stressed the tree (drought, flood, mechanical injury, etc.).

It is very different with non-native insect borers such as the emerald ash borer. The ability of the tree to recognize and respond to insect feeding as well as the insect’s ability to overcome those defenses is based on a long arms race between the plant and the insect. When a new insect arrives, native trees do not recognize it in the same way and are not able to mount defenses in the same manner and the insects are able to attack healthy trees. In its native range the emerald ash borer is not a pest because it acts like a native borer – attacking only stressed trees. 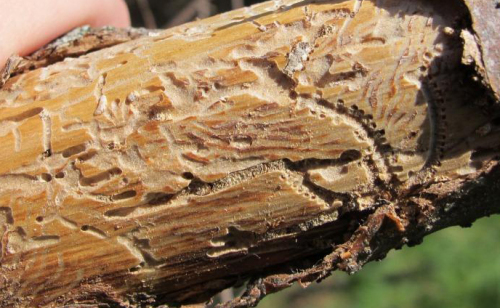 Tunnels from insect feeding beneath the bark of a white pine.  Photo by Ashley Sherrets, Buchanan County, Iowa State University Extension and Outreach. 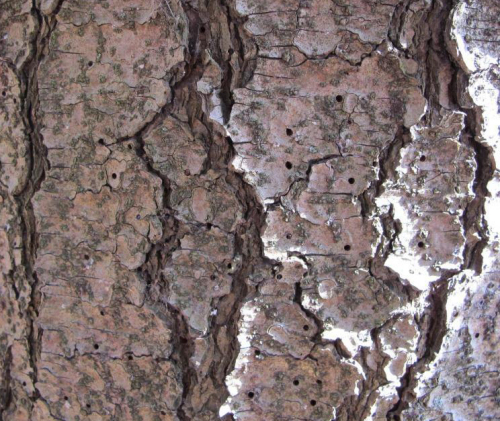 Links to this article are strongly encouraged, and this article may be republished without further permission if published as written and if credit is given to the author, Horticulture and Home Pest News, and Iowa State University Extension and Outreach. If this article is to be used in any other manner, permission from the author is required. This article was originally published on May 2, 2012. The information contained within may not be the most current and accurate depending on when it is accessed.