Honey Bee Swarms are Common but Not Dangerous

Swarming is a natural process in the life of a honey bee colony.   Swarming occurs when a large group of honey bees leaves an established colony and flies off to establish a new colony, essentially creating two from one.  Swarming is a natural method of propagation that occurs in response to crowding within the colony. Swarming usually occurs in late spring and early summer and begins in the warmer hours of the day.

Honey bee swarms may contain several hundred to several thousand worker bees, a few drones and one queen. Swarming bees fly around briefly and then cluster on a tree limb, shrub or other object. Clusters usually remain stationary for an hour to a few days, depending on weather and the time needed to find a new nest site by scouting bees. When a suitable location for the new colony, such as a hollow tree, is found the cluster breaks up and flies to it.

Honey bee swarms are not highly dangerous under most circumstances. Swarming honey bees feed prior to swarming, reducing their ability to sting. Further, bees away from the vicinity of their nest (offspring and food stores) are less defensive and are unlikely to sting unless provoked.

In most situations when a honey bee swarm is found on a tree, shrub or house you do not need to do anything. Swarms are temporary and the bees will move on if you patiently ignore them. Stay back and keep others away from the swarm, but feel free to admire and appreciate the bees from a safe distance.

You may be able to give a honey bee swarm to a beekeeper who will gather the swarm and relocate it for you.  To find a beekeeper willing to capture swarms check with a local beekeeper you know or call authorities such as pest control operators, police and fire departments and the local extension office.  The Iowa Honey Producers Association will help locate a beekeeper willing to rescue a swarm.  Contact the IHPA District Director for your region according to the IPHA District Directors list at www.iowahoneyproducers.org.

Only if a serious health threat is present because of the location of the swarm, such as in a highly traveled public area, should you attempt to do anything with a swarm.  Only as a last resort, you can spray a swarm of bees with soapy water (up to 1 cup of liquid dishwashing detergent in a gallon of water) to kill the bees.  Spraying a honey bee swarm is a risky operation because of the large number of bees. 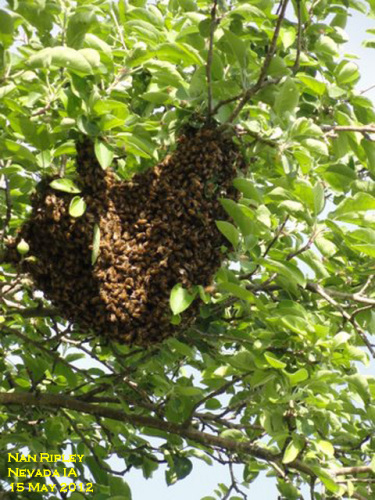 This honey bee swarm hung in the tree for only 24 hours before moving on.

Links to this article are strongly encouraged, and this article may be republished without further permission if published as written and if credit is given to the author, Horticulture and Home Pest News, and Iowa State University Extension and Outreach. If this article is to be used in any other manner, permission from the author is required. This article was originally published on June 9, 2017. The information contained within may not be the most current and accurate depending on when it is accessed.