Caddisflies - Another One Of Life's Frustrations

Coming into the office on the morning of May 15 brought to mind the movie line, “they’re ba-a-ack!”   This time, though, it was caddisflies, not poltergeists.

Caddisflies were in a pile on the sidewalk and on the glass of the Scott County Extension office door, attracted by the outside and vestibule lights.  See the photos below. Their appearance, like many things this year, seem to be about 2-3 weeks earlier than usual.

Caddisflies are tan, moth like insects that are about one-half inch long at maturity. They hatch in water, which is why they are found in river communities. They are especially noticeable at night when they swarm around lights.

They don't have mouth parts so they can't bite or feed on landscape plants, and in that respect, they are harmless. But in large numbers, they are annoying and a nuisance. We typically get calls from clients wondering what to do about the insects. There isn't a repellent and the best thing to do is to shut off your exterior lights and close the blinds or curtains of your house to discourage them from swarming around windows, doors, and patio lights.

Any dead groups around entrances and outside lights, as seen in the photos, can be swept up and discarded in the trash or compost pile.

Caddisflies vary greatly from place to place and from year to year without an obvious or logical reason for the change in abundance. We do know that their presence and abundance is correlated to river and stream health. Without a healthy river ecosystem the caddisfly populations decline because they do not survive and reproduce well in polluted or low-oxygen aquatic environments. When water quality is high, the caddisflies do better and populations increase.

Mass emergences of caddisflies, like the better-known mayflies, are temporary and the annoyance will pass. In the meantime, look on the plus side: large numbers of caddisflies indicate a healthy river! 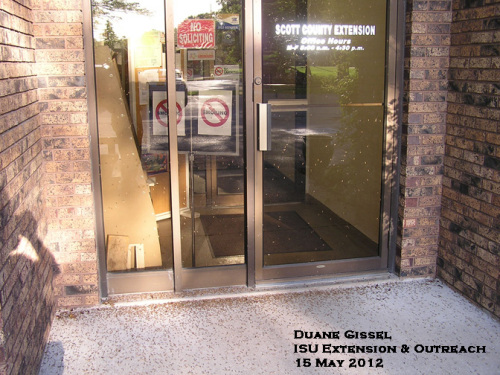 Caddisflies at the Extension office door in Bettendorf. 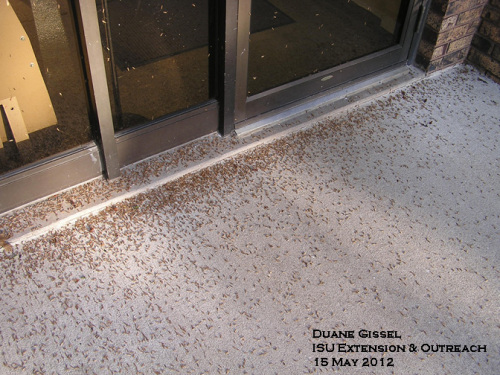 Caddisflies on the ground under the exterior light.

Links to this article are strongly encouraged, and this article may be republished without further permission if published as written and if credit is given to the author, Horticulture and Home Pest News, and Iowa State University Extension and Outreach. If this article is to be used in any other manner, permission from the author is required. This article was originally published on May 16, 2012. The information contained within may not be the most current and accurate depending on when it is accessed.