By Richard Jauron and Jennifer Bousselot, Department of Horticulture

Plant hardiness zone designations represent the average annual minimum temperatures at a given location. The new version has 13 zones, two more than the previous map, which were determined by data measured at weather stations during the 30-year period 1976-2005. Each zone is a 10-degree Fahrenheit band, further divided into A and B 5-degree Fahrenheit zones. Zone 5 has a -10 to -20 degree annual minimum average.
Compared to the 1990 version, zone boundaries in the new edition of the map have shifted northward across Iowa and much of the eastern United States. Locations on the new map are generally five degrees Fahrenheit warmer than the previous map.  The additional five degrees has resulted in a shift of half a zone for many locations in Iowa.  Some locations have gone from Zone 5a to Zone 5b, while others have gone from Zone 4b to Zone 5a.  The small northward shift of the zone boundaries shouldn't greatly change the selection of plants for Iowa gardens.
According the USDA, some of the changes in the zones are a result of new, more sophisticated methods for mapping zones between weather stations. These include algorithms that considered for the first time such factors as changes in elevation, nearness to large bodies of water, and position on the terrain, such as valley bottoms and ridge tops.
The hardiness zone map is only a guide and other location details factor into making plant selections.  For example, it is not safe to assume that the same plants can be grown in Mason City and Ames just because both cities are located in Zone 5a.  Mason City is often several degrees colder than Ames in winter. For example, Mason City has had below zero temperatures several times this winter, including -17 degrees Fahrenheit on Jan. 2; while the minimum temperature in Ames this winter has been -4 degrees. Also consider the differences between rural and urban areas, low-lying areas near streams and hilltops, and other local factors that affect temperatures when making their plant selections.
Over the next few years, gardeners in the northern one-third of the state may experiment with a few plants labeled as hardy in Zone 5a, but the most reliable choices for that part of the state are still Zone 4 plants.
The USDA map provides a Geographic Information System (GIS)-based interactive format of the map. Specifically designed to be Internet-friendly, the map website incorporates a "find your zone by ZIP code" function. The intent is to increase accuracy and detail. The new map — jointly developed by USDA's Agricultural Research Service (ARS) and Oregon State University's (OSU) PRISM Climate Group — is available online at www.planthardiness.ars.usda.gov 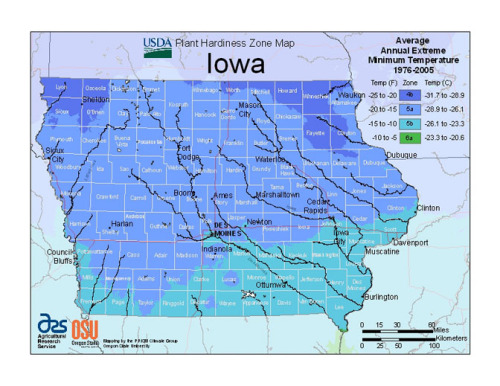 The new USDA Hardiness Zone Map puts most of Iowa in Zone 5.

Links to this article are strongly encouraged, and this article may be republished without further permission if published as written and if credit is given to the author, Horticulture and Home Pest News, and Iowa State University Extension and Outreach. If this article is to be used in any other manner, permission from the author is required. This article was originally published on February 8, 2012. The information contained within may not be the most current and accurate depending on when it is accessed.