In the spirit of the season, and inspired by the "Thankful for Insects" article elsewhere in this newsletter, I will take a break from writing about the 'bad and ugly' side of harmful fungi. Good fungi can be easily overlooked by most of us. Most grow in dark, damp places, they are often microscopic, and they come in so many shapes and forms that it's difficult to recognize them! However, we are surrounded by them and many of us probably use fungi or products that come from fungi every day. Fungi are used in our food, drinks, medicines, and industry- actually; some fungi are used to control plant diseases and pests!

So here are some of my favorite features of fungi and why I'm so grateful to have them around:

Fungi are delicious. They are so much more than just mushrooms on our pizza! For example, Camembert, Brie, and blue cheese are ripened with different fungi that provide the taste and texture that characterize them. Also, a fungal protein called mycoprotein, can also be highly nutritious and used a substitute for meat and it tastes good!

Fermentation.  I love Brie cheese, but it wouldn't be the same without good bread and a glass of wine. Yeasts are fungi used in baking and brewing processes. They convert sugars into carbon dioxide and alcohol. The carbon dioxide produced is what allows bread to rise prior to baking. In the case of beer and wine, yeasts are used to ferment sugars and produce alcohol but different strains may contribute subtleties in flavor that make the final product special.

Fungi can make you feel better. I am grateful for antibiotics. Penicillin is a great example of a fungus-derived medicine but there are several other compounds from fungi that help combat bacterial and fungal infections. Other medications derived from fungi are used to reduce cholesterol, decrease organ transplant rejection, and treat tumors.

Fungi clean the environment. Fungi can feed off organic matter and recycle nutrients. They make soils richer and help decompose dead plants and animals. Fungi are also used to clean up chemicals in the environment. Scientists are exploring new ways to clean pollutants from soils and water. Some fungi have been found to break down petroleum and pesticide compounds- fascinating!

Fungi are great partners. Mycorrhizal fungi grow with plant root systems and serve as an extension to bring in more nutrients to the plant. Plants become healthier and grow faster. Lichens, a partnership between fungi and algae, are able to live almost anywhere and they have been used to study air pollution and other environmental disturbances.

Finding the 'Fun' in fungi. Fungi are beautiful and diverse! I can spend hours looking at fungi through a microscope, they have amazing structures and fantastic colors. I also love looking for mushrooms in spring and fall; it's a great outdoor activity and you always find mushrooms you hadn't seen before. Look at these 'bird's nest' fungi below.

I hope that you now have a new appreciation for fungi or maybe some conversation facts for Thanksgiving dinner! Happy Holidays! 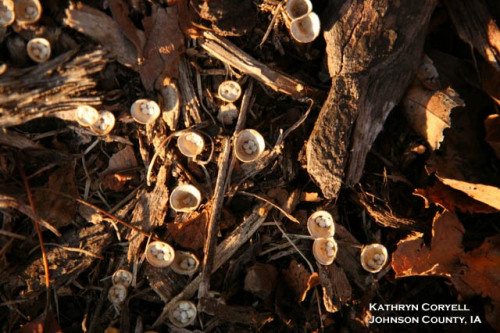 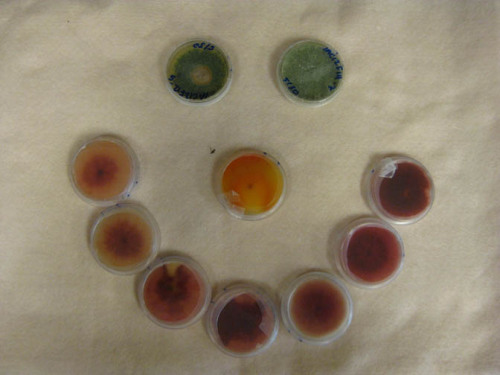 Fungal colonies growing in Petri dishes look almost as happy to be here as we are thankful to have them.

Links to this article are strongly encouraged, and this article may be republished without further permission if published as written and if credit is given to the author, Horticulture and Home Pest News, and Iowa State University Extension and Outreach. If this article is to be used in any other manner, permission from the author is required. This article was originally published on November 14, 2012. The information contained within may not be the most current and accurate depending on when it is accessed.