Earlier in October an alert ISU Master Gardener trained to watch for new invasive species, took a stink bug specimen to the Scott County extension office where County Extension Horticulturist Duane Gissel made the tentative identification based on training materials provide through ISU Extension and Outreach and the Iowa Master Gardener program. The specimen was submitted to the ISU Plant and Insect Diagnostic Clinic and confirmed as brown marmorated stink bug (BMSB).
This week additional samples of stink bugs have been reported in the Davenport and Bettendorf area. The timing of the collections (mid-autumn on a warm, sunny days) and the location of the live specimens indicates there are now established populations of BMSB in Scott Co, IA.  Previous detections of BMSB in Iowa were hitchhikers transported in boxes or crates from the eastern USA.
BMSB was first identified in the US in Pennsylvania in 2001. They spread rapidly and detections have been reported in 38 states as awareness of this invasive pest increased.
During the summer the stink bugs use their piercing-sucking mouthparts to feed on plant sap from fruits, vegetables, ornamentals and field crops. On warm fall days the stinkbugs migrate to overwintering sites. They congregate on houses and buildings and accidentally wander inside in a manner similar to boxelder bugs and multicolored Asian lady beetles. Stink bugs are named for the characteristic, disagreeable odor they produce, making the invasion even more distressing.
What Now?
We need your help. Specialists from Iowa State University and the state and federal departments of agriculture are tracking the presence of this and other invasive insects in the state. Please be on the lookout and report any suspicious stink bugs to your local county extension office or the ISU Plant & Insect Diagnostic Clinic.  Reports can be made by emailing digital images to the Clinic at insects@iastate.edu. 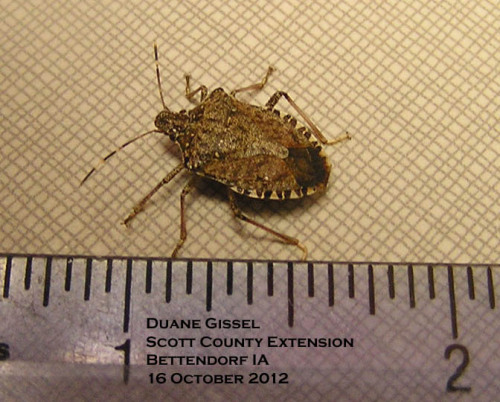 Links to this article are strongly encouraged, and this article may be republished without further permission if published as written and if credit is given to the author, Horticulture and Home Pest News, and Iowa State University Extension and Outreach. If this article is to be used in any other manner, permission from the author is required. This article was originally published on October 17, 2012. The information contained within may not be the most current and accurate depending on when it is accessed.