Flowering houseplants are a welcome sight during the long, gray days of winter. Cinerarias, cyclamens, primroses, and azaleas are flowering plants often sold at floral shops and other retailers in mid-winter to early spring. To maximize the duration of bloom in the home, select plants with just a few open flowers and provide good care.

Cineraria
The cineraria (Pericallis x hybrida) produces clusters of 1- to 3-inch-diameter, daisy-like flowers. They are available in a wide range of colors, including pink, red, lavender, purple, and blue. Many flowers have white "eyes".
Cinerarias should be placed in bright, indirect light with a temperature near 60 degrees Fahrenheit. Keep the potting soil evenly moist, but not saturated. If the potting soil becomes dry, the plant will wilt rapidly and may die if not promptly watered.
Cinerarias should remain attractive for 2 to 4 weeks if given good care. After the flowers dry and shrivel, discard the plants.
Cyclamen
The cyclamen (Cyclamen persicum) has dark green, heart-shaped leaves with silver markings. The flowers, produced on long stems held above the foliage, point downward and somewhat resemble badminton shuttlecocks or "birdies." Flowers are available in shades of white, pink, and red.
Place the cyclamen in a brightly lit location. Temperatures between 55 and 65 degrees Fahrenheit are ideal. Keep the soil moist, but avoid getting water in the crown of the plant as it may promote rotting. Fertilize the plant with a dilute fertilizer solution every 2 weeks while in bloom. If given good care, plants will bloom for several weeks. The cyclamen is normally discarded after flowering.
Primrose
Primroses (Primula species) produce attractive, 1- to 1½-inch-diameter flowers above a rosette of leaves. Flowers may be white, yellow, orange, pink, red, purple, or blue. Many flowers have contrasting centers or "eyes."
In the home, place plants in a cool (55 to 60 degree Fahrenheit), brightly lit location. Keep the potting soil evenly moist. Primroses decline rapidly if the potting soil dries out completely or remains constantly wet. With a proper environment, primroses often bloom for several weeks. Discard the plants when they are done blooming.
Azalea
Place azaleas (Rhododendron species) in brightly lit, cool locations in the home. An ideal site is one near a window that receives bright light (but no direct sunlight) and temperatures of 60 to 65 degrees Fahrenheit.
Proper watering is an important aspect of caring for an azalea. Water needs can be determined with the finger test. Check the potting soil daily with your finger. When the soil surface becomes dry to the touch, water the plant until water begins to flow out the bottom of the pot. Discard the excess water. When placed in a favorable location and given good care, azaleas may bloom for three to four weeks.
Azaleas sold by florists are not winter hardy outdoors in Iowa and are normally discarded after flowering. However, the azalea can be kept as a houseplant. After the plant has flowered, place the azalea in a sunny east or west window. Continue proper watering practices. When the azalea begins to grow, fertilize monthly with an acid-type fertilizer.
The azalea should be moved outdoors in late May. Select a site in partial sun. A site that receives morning sun and afternoon shade is generally a good site. Don’t remove the plant from the pot, simply dig a hole and set the pot in the ground up to its rim. Be sure to water the plant during dry weather. Fertilization should be discontinued in mid-summer.
Cool temperatures are required for flower initiation. Keep the azalea outdoors until early fall. Bring the plant indoors right before the first hard frost. Indoors, place the azalea in a well-lit, cool location. Keep the soil evenly moist. If the plant receives the proper care, the azalea should bloom sometime in winter. 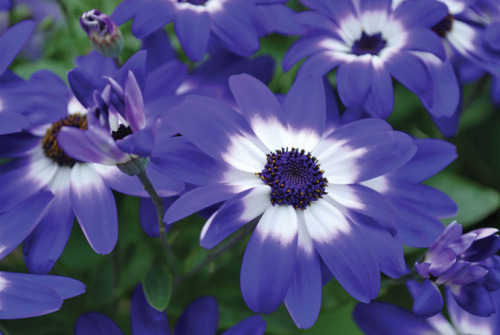 Links to this article are strongly encouraged, and this article may be republished without further permission if published as written and if credit is given to the author, Horticulture and Home Pest News, and Iowa State University Extension and Outreach. If this article is to be used in any other manner, permission from the author is required. This article was originally published on January 11, 2012. The information contained within may not be the most current and accurate depending on when it is accessed.