One of my favorite ‘oddball’ samples is peppers damaged by mites. The peppers look like potatoes growing on the plant the way they are scabby and misshapened. Cyclamen mites are the most likely culprit for these dramatic symptoms. The mite feeding causes the peppers to russet; the russeting is brown and rough to the touch and appears over large portions of the pepper. If you look closely the russeting has a crackled or net-like appearance.

Cyclamen mites cause this impressive damage by feeding on the young developing fruit. They inject auxins (growth regulators) as they feed which cause the fruit to form the russeted appearance. It does not take very many mites to cause damage. Once the damage is apparent the mites are long gone and curative treatment is not possible.
Controls focus on cultural methods that prevent cyclamen mites from getting to the peppers. Problems with peppers in greenhouses are often from cyclamen mites moving onto the pepper plants from nearby ornamental plants, so keeping ornamentals away from peppers can reduce the chance of damage. In a field situation strawberries can serve as a source of cyclamen mites that infest nearby peppers.
The damage is only skin deep with the inner tissue appearing normal. I suspect the peppers could still be eaten but I think the skin would be a bit too chewy! Luckily cyclamen mites are only an odd occasional pest of peppers and this is not something that most gardeners will ever encounter. 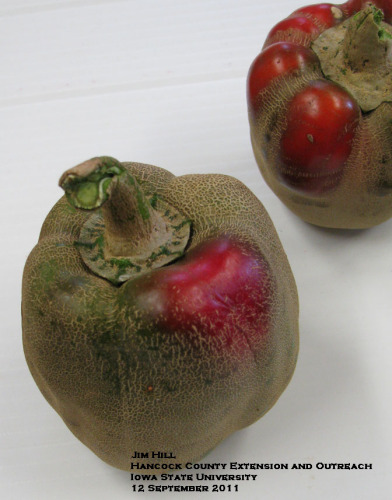 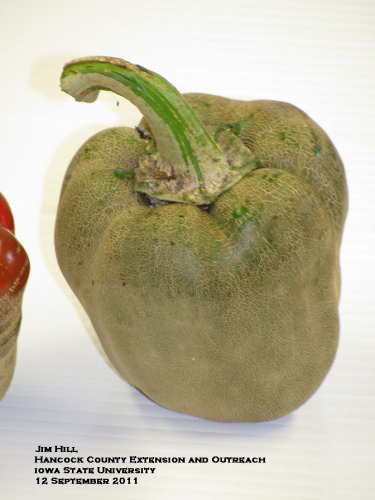 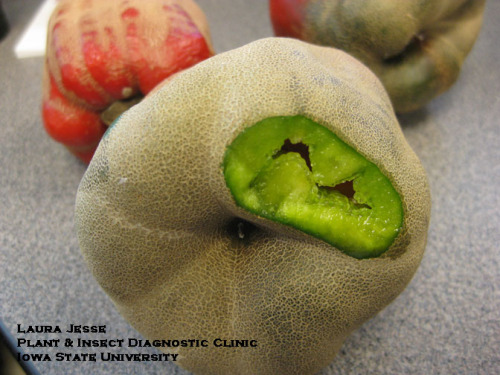 Links to this article are strongly encouraged, and this article may be republished without further permission if published as written and if credit is given to the author, Horticulture and Home Pest News, and Iowa State University Extension and Outreach. If this article is to be used in any other manner, permission from the author is required. This article was originally published on September 14, 2011. The information contained within may not be the most current and accurate depending on when it is accessed.