Mosquito Activity Low in Most of Iowa

By Brendan Dunphy, Department of Entomology

Below is the summary of mosquito activity in Iowa from the ISU Medical Entomology Laboratory. Mosquito surveillance in Iowa has been ongoing since 1969. During the summer months, the Iowa State University Medical Entomology Laboratory, in cooperation with the Iowa Department of Public Health and the University of Iowa Hygienic Lab, monitors mosquito populations and mosquito-borne diseases in Iowa. The mosquito populations are monitored using New Jersey Light Traps set around the state (photo below).

The Iowa mosquito collection data for the year is available online at the Iowa Mosquito Surveillance website. The statewide average mosquito counts by week (including a comparison to last year's mosquito activity) are shown. Click on "County" on the left side of the page to see individual county data. Click "Year" to see historical data comparing yearly mosquito population trends.
Summary for the week of August 1, 2011:  Mosquito counts remain quite low this summer at most surveillance sites across the state. In some counties, overall weekly activity is as low as it has been all year. This corresponds to the much fewer complaints this year, or none at all thus far. In this regard, the mosquitoes' misfortune is the humans' fortune.
A quick look at the graph on the homepage will provide a comparison to what we're experiencing now compared to last year. As you can see, we are in good shape, especially in most sites in eastern and central Iowa. For example, Des Moines populations are as low as they have been in a long time. Flooding in Dubuque has impeded the trapping effort over the last week, but once we're back to running, it will be interesting to see if and how mosquito counts have been affected.
Although light trap counts in western Iowa ring no alarms, another CDC trapping effort in Council Bluffs and Sioux City by our personnel last week indicates that on the front of the flood, mosquitoes are still intense. A preliminary look seems to show that they are just as bad, if not more so, than they were last month.  Some sites, for example, Lake Manawa in Council Bluffs, yielded thousands of mosquitoes per CDC trap. We'll have those data ready within a week.
Although floodwater species (Aedes and Psorophora species) are not extremely abundant at most sites, the container breeders (including our most important vectors of arbovirus) are proving to be common right now. Culex pipiens group and Culex tarsalis, vectors of West Nile virus (WNV) and other arboviruses, are encountered frequently but especially so in the West. What makes this more important is that we have entered WNV "season." WNV-positive samples from mosquito pools and chicken blood draws are most common at this time of year. We have encountered positives for WNV in chickens from Polk, Pottawattamie, and Woodbury Counties. 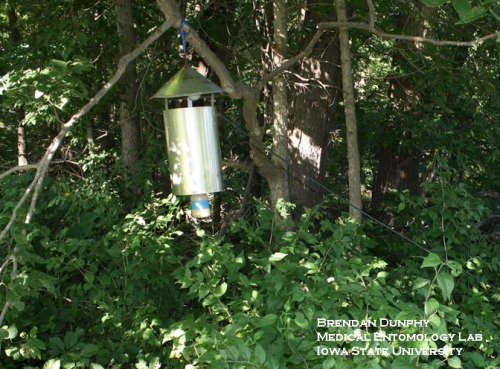 The New Jersey light trap used to monitor mosquito populations around Iowa has a light and a small fan to efficiently capture mosquitoes in the collection jar at the bottom.

Links to this article are strongly encouraged, and this article may be republished without further permission if published as written and if credit is given to the author, Horticulture and Home Pest News, and Iowa State University Extension and Outreach. If this article is to be used in any other manner, permission from the author is required. This article was originally published on August 10, 2011. The information contained within may not be the most current and accurate depending on when it is accessed.