Earlier this summer the Asian longhorned beetle, Anoplophora glabripennis, was found in Bethel, Ohio (30 miles southeast of Cincinnati). The infestation was identified after a property owner noticed unusual damage to several maples. A survey is underway to determine the extent of the population. Over 600 infested trees have already been found.  Ohio is the fifth state to detect this recent exotic pest.

This detection emphasizes the importance of public awareness of exotic pests such as Asian longhorned beetle (ALB). The general public has been critical in detecting many of the infestations. See history of ALB, below.
ALB is a native of China and was first detected in the U.S. in New York in 1996. It probably arrived after travelling to the United States inside solid wood packing material from China. The beetles are borers that attack many species of trees but prefer maples, birches, willow, horsechestnut, buckeye and elm. ALB kills trees when larvae tunnel into large branches and the trunk. ALB is a serious pest of hardwood trees and to date, has caused the destruction of more than 72,000 hardwood trees in the U.S.
So far, the ALB has NOT been found in Iowa, but it is important to be aware of this insect and watch for it. Infestations are found by aware people who notice the large beetles or damage to trees.  In Iowa you can help by reporting sightings of an unusual beetle and any signs of infestation to the Iowa Department of Agriculture and Land Stewardship (515-725-1471), the Iowa Department of Natural Resources (515-281-4915), or ISU Extension (515-294-0581).
Early detection of infestations and rapid treatment response are crucial to successful eradication of the beetle. See the USDA Forest Service Pest Alert for more information, including photos and information on how to submit samples for identification.
Description of ALB
Adult ALB are very large, distinctive-looking insects with the body alone measuring 3/4- to 1-1/4 inches and then the antennae are up to 2.5 times the body length with distinctive black and white bands on each segment. Adult beetles have a jet black body with mottled white spots on the back. See photo below.
Life cycle
ALB has one generation per year. Egg-laying niches are chewed into the bark by the female beetle, and a single egg is deposited in each niche. Each female is capable of laying up to 160 eggs. Eggs hatch in 10-15 days, and the larvae tunnel under the bark into the wood where they feed, grow, pupate and eventually transform to the adult stage. Adults emerge from the trees by boring a 3/8 inch, round exit hole in the tree. Adults usually stay on the trees from which they emerged or may disperse short distances to a new host to feed and reproduce. Tunneling by larvae inside the tree girdles tree trunks and branches. Repeated ALB attacks lead to dieback of the tree crown and, eventually, death of the tree.
Brief History of Detections
ALB was first detected in New York City in 1996 and that infestation is still active in Long Island, Queens, Manhattan, Staten and Prall’s Islands. ALB was detected in Chicago in 1998 and two cities in New Jersey in 2002 and 2004. The New Jersey and Chicago infestations are likely eradicated as no beetles have been detected since 2006 and 2008, respectively. In New Jersey 729 infested trees were destroyed and 1551 infested trees were destroyed in Chicago.  In 2008 a large infestation was found in Worchester, Massachusetts and in 2010 an infestation was found in Boston. Finally the Ohio infestation was found in 2011.
Management
Currently, the only effective means to eliminate ALB is to remove infested trees and destroy them by chipping or burning. To prevent further spread of the insect, quarantines are established to avoid transporting infested trees and branches from the area.  Please do you part; don't transport firewood! 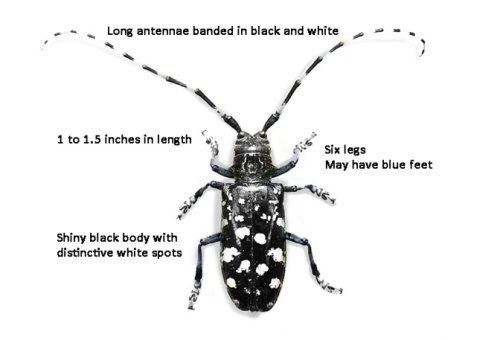 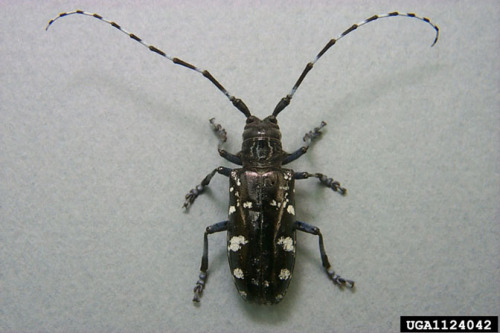 Links to this article are strongly encouraged, and this article may be republished without further permission if published as written and if credit is given to the author, Horticulture and Home Pest News, and Iowa State University Extension and Outreach. If this article is to be used in any other manner, permission from the author is required. This article was originally published on August 10, 2011. The information contained within may not be the most current and accurate depending on when it is accessed.