Bacterial canker, caused by Clavibacter michiganensis subsp. michiganensis, may cause devastating losses in field-grown or greenhouse tomatoes. Bacterial canker was one of the first bacterial diseases reported on plants. Over a hundred years ago, pioneer plant pathologist Erwin F. Smith was the first to describe this disease in 1909, in Michigan. Before Smith's time, many scientists were not fully convinced that bacteria could cause diseases on plants, but nowadays to us plant pathologist nerds, he is considered the father of bacterial plant pathology.

Now back to tomatoes. Bacterial canker can be one of the most destructive and difficult-to-manage diseases of tomatoes.  The first noticeable symptom is wilting of plants and browning on the edges of the leaves. Sometimes stems can turn brown; later, they can split open, revealing a brown color. The pith (mushy stuff in the middle of the stem) may be completely discolored and 'mealy' (see pictures). Fruit may also show small spots (1/8 inch across) with a raised brown center and a whitish margin or halo; and these are often referred to as bird's-eye spots.
Bacterial diseases that cause wilting can be distinguished from fungal disease caused by Verticillium or Fusarium by checking for bacterial streaming. Bacterial streaming consists of bacterial masses 'oozing' out of vascular tissues, and this may be observed by slicing stems and placing them in water (see picture). If whitish or yellowish strands are observed after a couple of minutes, the wilting is most likely caused by bacteria.
Bacterial canker can survive the winter in plant debris, weed hosts, wooden stakes. It may also occur from contaminated seed sources and transplants and may be spread mechanically by pruning and de-suckering. Secondary spread may also occur by splashing water and by handling plants. Once the bacteria enter the vascular tissue, the disease progresses rapidly. Plants infected late in the season may show little reduction in yield; however, plants infected early may die and set no fruit.
The most effective way to control bacterial wilt is by making sure you have clean seed and certified disease-free transplant. Transplants do not show symptoms making it impossible to distinguish healthy from infected. After harvest, remove infested debris and sterilize wooden stakes in a 1% bleach solution. When handling or pruning plants, tools should be disinfected between cuts unnecessary wounding should be avoided. Crop rotation with a non host plant is also recommended. 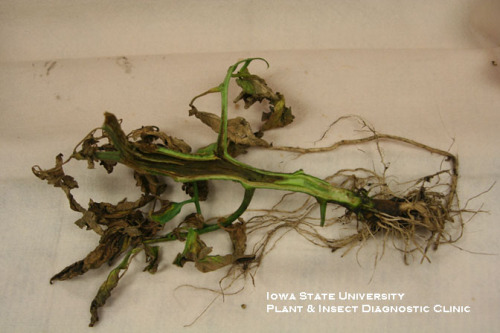 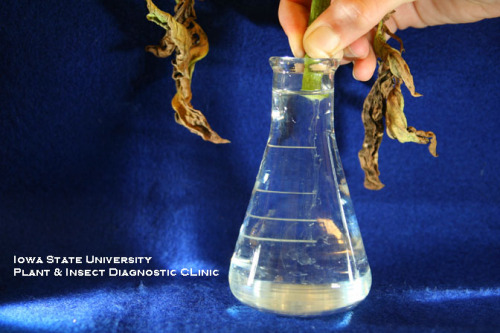 Links to this article are strongly encouraged, and this article may be republished without further permission if published as written and if credit is given to the author, Horticulture and Home Pest News, and Iowa State University Extension and Outreach. If this article is to be used in any other manner, permission from the author is required. This article was originally published on July 27, 2011. The information contained within may not be the most current and accurate depending on when it is accessed.