This invasive insect causes primarily cosmetic damage to elms. We are not expecting this insect to be harmful to tree health. The European elm flea weevil was reported in the northeastern US in 1982 and has been in the upper Midwest since at least 2003.

European elm flea weevils are a small beetle about 2-3 mm long, and brown with darker spots on its back. Although difficult to see with the naked eye it has a typical curved weevil snout. It gets the name of flea weevil for its ability to hop and its hind legs are a bit enlarged, as if it has been lifting weights.

The European elm flea weevils feed on American, Siberian, Chinese and hybrid elms, but they prefer Siberian elms. The adults feed on leaves, and cause small holes all over the leaves.  The female weevil lays eggs along the leaf veins and the larvae feed within the leaves as leafminers and leave blotchy dead areas on the elm leaf.  The larvae pupate within the mine after several weeks of feeding. They are reported to have a single generation each year. The adults overwinter and in the spring lay eggs on the elm leaves. The larvae feed, pupate and the newly emerged adults feed through the rest of the summer before overwintering.

So far in Iowa we have confirmed the European elm flea weevil from specimens in Tama County and Dallas County and there is an additional photo report.  We suspect once we start checking we will find it through most of the state.

Links to more information and photos: 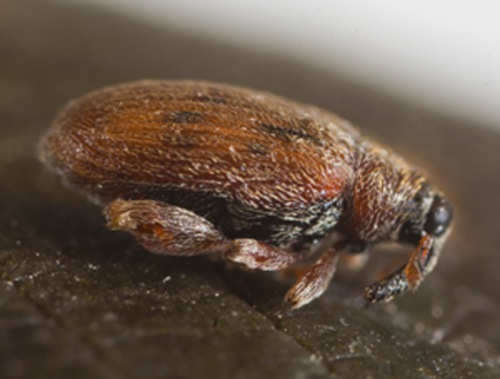 European elm flea weevil.  We had to kill it to keep it from jumping!  You can see the elongated snout and the enlarged legs.  Photo by Winston Beck.

Links to this article are strongly encouraged, and this article may be republished without further permission if published as written and if credit is given to the author, Horticulture and Home Pest News, and Iowa State University Extension and Outreach. If this article is to be used in any other manner, permission from the author is required. This article was originally published on July 13, 2011. The information contained within may not be the most current and accurate depending on when it is accessed.