Like swallows returning to San Juan Capistrano, the Japanese beetles have reappeared on Iowa's roses and grape vines.  Sigh.  Here we go again.

See the June 23, 2010 Horticulture and Home Pest News for a complete review of the Japanese beetle biology and control.

On second thought, Japanese beetles are not like swallows, since the Japanese beetles never went anywhere.  They've been underground as larvae since last summer.  They are not returning from somewhere else, but their timing is as dependable as that of the famed swallows.

We continue to monitor and document the spread of the Japanese beetle within Iowa.  Six counties where Japanese beetles were not previously reported were added to our list in 2010 via the bean pod mottle virus/bean leaf beetle survey coordinated by Forrest Nutter in the Department of Plant Pathology and Microbiology.  The 6 new counties were Audubon, Carroll, Cherokee, Hamilton, Harrison and Ida.  The current, reported distribution of the Japanese beetle is shown in the accompanying map.  If you find beetles that you suspect are Japanese beetles, please send specimens or digital images to Extension Entomology, ISU, Ames IA 50011 (insects@iastate.edu) for confirmation and recording as a new county record. 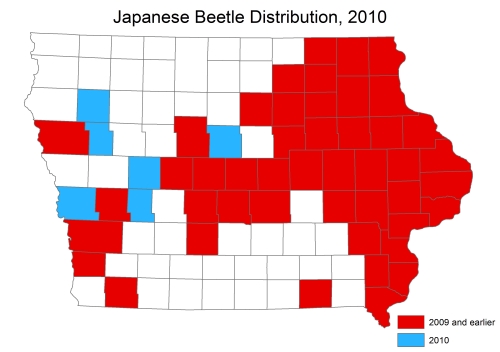 Reported distribution of the Japanese beetle in Iowa, December, 2010.

Links to this article are strongly encouraged, and this article may be republished without further permission if published as written and if credit is given to the author, Horticulture and Home Pest News, and Iowa State University Extension and Outreach. If this article is to be used in any other manner, permission from the author is required. This article was originally published on June 29, 2011. The information contained within may not be the most current and accurate depending on when it is accessed.