Periodical Cicadas in Iowa in 2011

This year there are two, not one, but two, opportunities to see periodical cicadas in Iowa.

The periodical cicadas, photo below, are the 13-year and 17-year cicadas that appear in June and buzz in wooded areas from mid-morning till mid-afternoon. Cicadas that you hear in mid-July from late afternoon through evening are annual cicadas. For more on periodical cicadas see the Plant & Insect Diagnostic Clinic.
Brood XIX in SE Iowa
The cicadas of Brood XIX are 13-year cicadas and are found in a wide swath that extends from the southeast corner of Iowa through Missouri and Arkansas to Georgia and Virginia. See the U.S. distribution map maintained by magicicada-dot-org.  Brood XIX of the periodical cicadas is the largest brood of the 13-year cicadas.
The periodical cicadas of Brood XIX have been present in the southern states for a few weeks and have been reported in isolated locations in Iowa this past week.  The Brood XIX periodical cicadas have lived as nymphs underground since 1998. This is the year they transform to noisy, winged adults to emerge in June for a brief moment in the sun. Then they will disappear back in the ground where they will stay until 2024. Amazing.
Historical records indicate the Brood XIX periodical cicadas were found in 12 southeastern counties. However, the survey of county extension offices and foresters in 1998 yielded reports in only 7 of those counties. Please see the accompanying map.
Cicadas will not be everywhere within the expected area. Previous experience indicates that cicada infestations are very spotty. The most likely places to see this spectacle of Nature are in large, long-standing, upland native woodlands.
Survey Plans for 2011. We will contact county extension offices and DNR foresters in late June for reports of periodical cicada activity in 2011. Others are encouraged to email reports of observed periodical cicada activity during the next 4 weeks to insects@iastate.edu.
Brood IV, Premature Emergence
A year ago we spoke about the recent phenomenon of 17-year cicadas emerging 4 years early. Last year we saw scattered evidence of premature emergence of Brood III 17-year cicadas. That brood should emerge in 2014 but a few early-emergers appeared in 2010. See the Horticulture Newsletter from May 26, 2010.
A phone call earlier this week reports the same thing is happening this year with Brood IV of the 17-year cicadas. Brood IV cicadas should emerge in 2015, a few are emerging prematurely, 4 years early to be exact. Brood IV is one of our smallest broods in Iowa and one that gets little attention (overshadowed by the monstrous emergence of Brood III the preceding year). The distribution of Brood IV in Iowa is less-well documented, but apparently much more fragmented than other broods. In general, Brood IV can be expected in the area from Fremont County to Harrison to Boone to Ringgold, though survey results in 1998 yielded reports from only 8 counties: Boone, Pottawattamie, Adair, Mills, Montgomery, Adams, Fremont and Page. 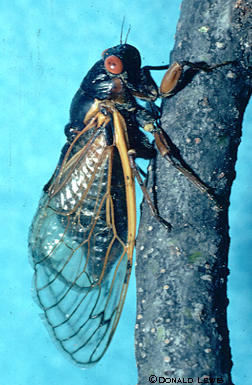 Periodical cicadas appear in June and have a black body, red eyes and orange wing veins. Photo by Donald Lewis. 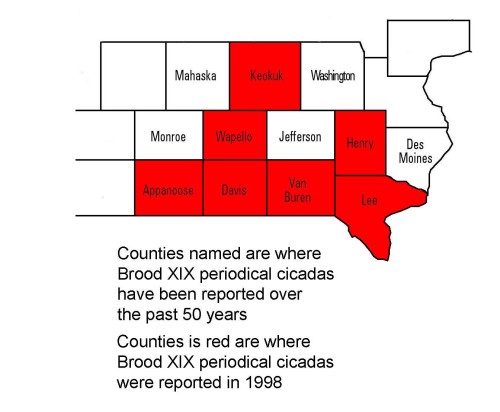 Links to this article are strongly encouraged, and this article may be republished without further permission if published as written and if credit is given to the author, Horticulture and Home Pest News, and Iowa State University Extension and Outreach. If this article is to be used in any other manner, permission from the author is required. This article was originally published on June 1, 2011. The information contained within may not be the most current and accurate depending on when it is accessed.