Control of Nimblewill in Lawns

Nimblewill (Muhlenbergia schreberi) is a warm-season perennial grass. Nimblewill is a thin, wiry grass that is pale green or gray-green in color. It spreads by aboveground shoots or stolons, often forming circular spots in the lawn. Nimblewill also spreads via seeds. Plants flower and produce seeds in late summer/early fall.
Nimblewill grows in sun or shade. In home lawns, nimblewill is most often found in shady areas. Kentucky bluegrass doesn't grow well in shady sites. Nimblewill (like most lawn weeds) is most successful in establishing itself in thin, poorly growing stands of turfgrass.
Nimblewill is easy to spot in lawns because it greens up late in spring (typically May in Iowa) and turns brown in early fall. Nimblewill is objectionable in the lawn because of its gray-green color and delayed green-up in spring and early browning in fall.
Nimblewill is difficult to control in bluegrass lawns as control options are limited. One way to control nimblewill infested areas is to completely destroy the nimblewill with an application of glyphosate (Roundup). Another option is to dig up and destroy the nimblewill. Bluegrass or other cool-season grasses have to be reestablished by seeding or sodding after the nimblewill is completely destroyed. There was no way to selectively control nimblewill growing in Kentucky bluegrass or other cool-season grasses.
While the selective control of nimblewill was not possible in past years, it is an option as of 2011. Tenacity (mesotrione) is a systemic herbicide that selectively controls nimblewill in bluegrass lawns. (It is also safe for perennial ryegrass, tall fescue, and the fine-leaf fescues.) Tenacity can only be applied by lawn care professionals. It will not be available to home gardeners. When treated with Tenacity, nimblewill stops growing, turns white, and eventually dies. Three applications (at two to three week intervals) are usually necessary to control nimblewill. Occasionally, white tips can also be seen on Kentucky bluegrass and other cool-season grasses following treatment. This is a temporary symptom, as the grass tips will be removed during subsequent mowings. 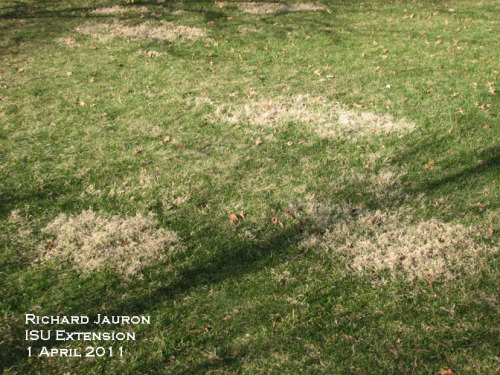 Nimblewill forms patches that turn green much later in the spring than surrounding turfgrasses in the lawn.

Links to this article are strongly encouraged, and this article may be republished without further permission if published as written and if credit is given to the author, Horticulture and Home Pest News, and Iowa State University Extension and Outreach. If this article is to be used in any other manner, permission from the author is required. This article was originally published on April 6, 2011. The information contained within may not be the most current and accurate depending on when it is accessed.