Boxelder Bugs in the Springtime

Iowans are accustomed to seeing the familiar and well-known black-and-red boxelder bug (BEB) adults cluster on the south side of the house and invade during late fall in some years. These adults are following an ages-old habit of migrating from the trees to wintertime hiding places such as protected cracks and gaps where they can hunker down and hibernate out of the weather.

As late winter turns to spring those BEB adults that have survived the winter hidden behind exterior siding and in attics, wall voids, window/door casings, and similar protected areas attempt to make the return trip from hiding place to trees. At this time of year, overwintered bugs may be noticeable in the air on sunny days, and on cooler days may be "hanging around" on the house siding or in the lawn.
Spring is also the time of year when there may be renewed activity by these (and other) accidental invaders inside the house. Some bugs attempting to escape to the outdoors make a wrong turn inside the wall void and move inward into living areas, emerging from beneath baseboards, window and door frames, light fixtures, vents, etc.
Homeowners often seek immediate and complete relief from the annoyance of accidental invaders. Unfortunately, this simply is not possible, since the bugs are emerging from hidden areas that are inaccessible to insecticides. Household foggers ("bug bombs") will not penetrate and control pests in these areas. Residual sprays generally kill invaders too slowly to be considered successful.
The best way to dispose of ladybugs and boxelder bugs appearing indoors is with a vacuum cleaner. Both insects tend to emit substances that can stain surfaces, making a broom less desirable. Repeated vacuuming may seem inefficient and monotonous, but it remains the most practical control.
During the summer months, BEBs live, feed and reproduce on trees, shrubs and other plants (including boxelders, maples, ashes and others). They feed on sap from their host plants but do not cause significant damage. The bright red, soft-bodied nymphs are occasionally seen in midsummer in unlikely places such as in the lawn or flower beds, and on shrubs, sidewalks and driveways.
It is not necessary and probably unwise to attempt to control boxelder bugs in early spring. These are not the same bugs that will invade the house in the fall. The overwintered bugs produce offspring in early summer that mature into adults and reproduce in July.  It is this second generation of the summer that produces the accidental invader adults in October, that is, the "grandchildren" of the BEB in the lawn in April. The number that will be present in October is dependent on the upcoming weather, and killing some adults now will not make as much difference as will the weather in July. 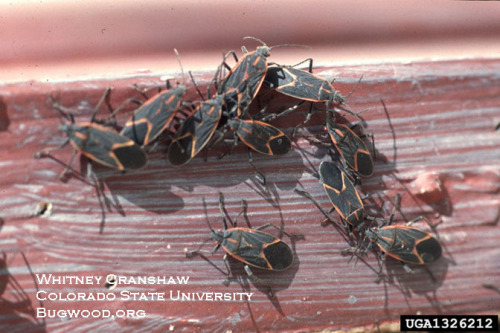 Boxelder bug adults come out of hibernation in early spring. 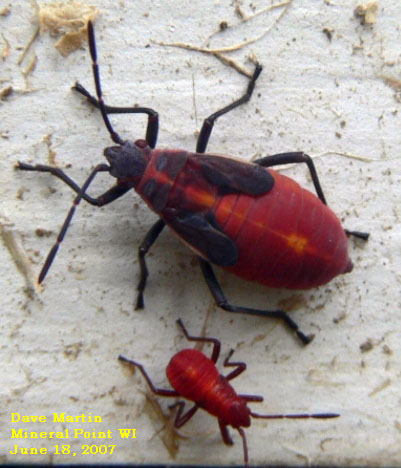 Links to this article are strongly encouraged, and this article may be republished without further permission if published as written and if credit is given to the author, Horticulture and Home Pest News, and Iowa State University Extension and Outreach. If this article is to be used in any other manner, permission from the author is required. This article was originally published on April 6, 2011. The information contained within may not be the most current and accurate depending on when it is accessed.