Have you seen this stink bug?

Currently there have been reports of BMSB in 33 states, but only in a few states are there large enough populations of BMSB to cause serious damage to produce and crops.  In Iowa we are tracking this insect in order to determine when we have established populations.  It appears that once established the BMSB is primarily noticed as a household pest as it come indoors in the fall.  Then after a few years populations are large enough to start causing damage in fields, orchards, and gardens.

To date the two reports of BMSB in Iowa appear to be one to a few individual insects that arrived from boxes shipped into Iowa from states to the east that have large populations.  This insect gets around easily this way because it moves into buildings and warehoused for the winter.  We do not yet believe there is an established population in Iowa, but we need your help to track this insect.

Homeowners are likely to be the first to notice BMSB either in the fall when they gather on homes, or in the next month as warm weather causes any BMSB overwintering in walls or the attic to move into the living areas of the house.  If you notice any insects resembling the BMSB please send a digital image to insects@iastate.edu or submit a sample to the Plant & Insect Diagnostic Clinic (no fee).

There are also many native stink bugs and other closely related bugs in Iowa that resemble the BMSB.  For pictures of these please see our Stink Bugs and Similar-Appearing Insects in Iowa.

For a current map of detections in Iowa please see https://cpnpestmaps.ent.iastate.edu/ 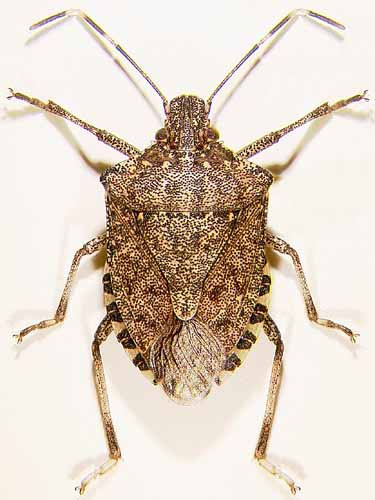 Links to this article are strongly encouraged, and this article may be republished without further permission if published as written and if credit is given to the author, Horticulture and Home Pest News, and Iowa State University Extension and Outreach. If this article is to be used in any other manner, permission from the author is required. This article was originally published on April 20, 2011. The information contained within may not be the most current and accurate depending on when it is accessed.