The Iowa State University Extension Plant and Insect Diagnostic Clinic (ISU-PIDC) and the Iowa Department of Agriculture and Land Stewardship confirmed that a single dead specimen of the brown marmorated stink bug (BMSB), Halyomorpha halys, was recently collected in Cedar Rapids, Iowa and submitted to ISU-PIDC for diagnosis. This is the first confirmation of this pest in Iowa. It is not known if this find indicates an established population or an isolated individual as BMSB travels readily in shipping containers and with people.

Brown marmorated stink bug was discussed and described in the ISU Horticulture & Home Pest News, November 11, 2009.
The brown marmorated stink bug is an introduced, invasive insect new to North America. It was first identified in fall 2001 in Allentown, Pa.; though unconfirmed reports go back as far as 1996. The accidental introduction was possibly via shipping containers from Asia. BMSB is reported to have established populations in California, Connecticut, Delaware, Indiana, Kentucky, Maryland, Massachusetts, New Hampshire, New Jersey, New York, North Carolina, Ohio, Oregon, Pennsylvania, Tennessee, Virginia and West Virginia. Detections have been made in a handful of other states that now includes Iowa.
BMSB feeds on sap from a long list of host plants including many fruits, vegetables, field crops, shade trees and other woody ornamentals. In addition to the considerable damage done to crops, gardens and landscapes, the adults have the disturbing habit of migrating to houses and other buildings in the fall to overwinter. Homeowners on the East Coast describe the stink bug invasion as worse than boxelder bugs and lady beetles, combined. It is this habit of spending the winter in buildings that has aided its dispersal by movement in containers and vehicles.
The brown marmorated stink bug is approximately 5/8 inch long with a mottled brownish grey color and a "shield" shaped body. The antennae and top of the abdominal segments protruding from beneath the wings have alternating dark and light bands.
Iowans are encouraged to help look for this pest and to contact ISU Extension with sample specimens, digital photos or detailed descriptions and sightings.   Please report your observations and samples to the ISU Plant & Insect Diagnostic Clinic. 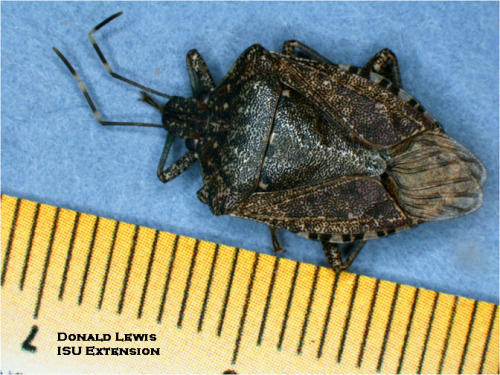 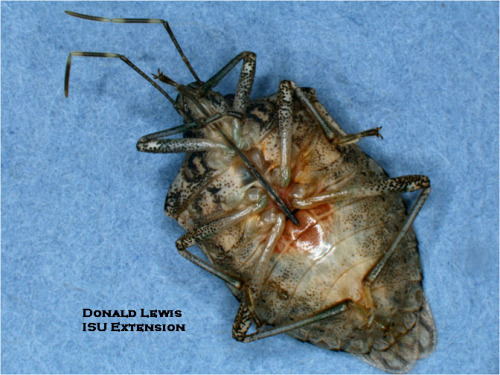 Links to this article are strongly encouraged, and this article may be republished without further permission if published as written and if credit is given to the author, Horticulture and Home Pest News, and Iowa State University Extension and Outreach. If this article is to be used in any other manner, permission from the author is required. This article was originally published on March 9, 2011. The information contained within may not be the most current and accurate depending on when it is accessed.