By Paul Domoto, Department of Horticulture

The root systems of perennial plants are much less cold tolerant that the above ground portions of the plants. For the most species we can grow in Iowa, root injury can begin occur when the soil temperature drops below 18 to 15 degrees F. Fortunately, the soil has a tremendous buffering capacity and the temperature in the root zone seldom drops this low, but it can when there is a shortage of soil moisture going into the winter.

Soil moisture is important for the transfer of heat energy in the soil. During the growing season, the soil temperature near the surface is warmer than at the lower depths, and the net movement of energy is from the surface to the lower depths. A moist soil will conduct greater energy downward than a dry soil because much of the pore space between particles is occupied by air and air is a very poor conductor of energy. Also, because of the lack of moisture holding capacity, sandy soils conduct less energy than loamy soils.

Therefore, if we continue to go into the winter with a shortage of soil moisture, the potential for winter injury to the roots will remain high. However, for injury to occur, the dry soil conditions would have to be coupled with the lack of snow cover and an extended period of sub-freezing temperatures. So besides hoping for snow cover and a mild winter, measures that can be taken to reduce the risk of winter root injury would include: 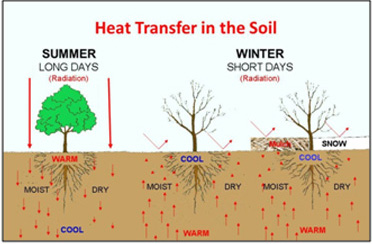 Links to this article are strongly encouraged, and this article may be republished without further permission if published as written and if credit is given to the author, Horticulture and Home Pest News, and Iowa State University Extension and Outreach. If this article is to be used in any other manner, permission from the author is required. This article was originally published on December 7, 2011. The information contained within may not be the most current and accurate depending on when it is accessed.