One of the "new" things I learned this summer was how the tobacco budworm, Heliothis virescens (Lepidoptera: Noctuidae) also attacks and feeds on a wide variety of garden flowers, especially geraniums. While this was new to me, others have been watching an emerging problem for some time. The caterpillars feed on foliage and flower buds of geranium, reducing plant vigor and blooms, respectively. See the photo below for typical damage done to flower buds.

As the official name implies, the tobacco budworm is a serious pest of tobacco in the southern United States. There is a long list of crops and vegetables it attacks, including alfalfa, clover, cotton, soybean, cabbage, cantaloupe, lettuce, pea, pepper, squash, and tomato. The favorite herbaceous flower for this insect is the geranium though it also feeds on impatiens, petunia, nicotiana, ageratum, dandelion, marigold and several other bedding plants.

Tobacco budworm caterpillars show remarkable variation in color from black to red to green and grow up to 1.5 inches in length.  Color may vary with the food they have eaten. Larger caterpillars have alternating light and dark stripes. See photo below. Larvae live and grow for about a month and there are at least 2 generations per summer. Populations are highest in late summer and fall. Read more and see photos of moths and caterpillars at BugGuide.

It is unclear if the tobacco budworm survives through the winter in Iowa, or if new arrivals (moths) blow in from southern U.S. every summer. The budworm spends the winter a few inches deep in the soil as a pupa. If winter temperatures are extremely cold (-20 degrees F) the pupae do not survive. However, soil temperatures may not reach low enough to kill pupae in some winters or in protected areas near buildings. Budworms can overwinter in the soil of potted plants that were outdoors during the summer and then moved indoors for the winter. Budworms also may be active year-round in greenhouses. Greenhouse infestations may be responsible for some of the budworm problems seen here in the upper Midwest. 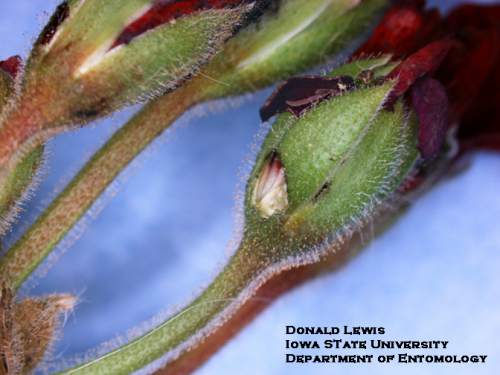 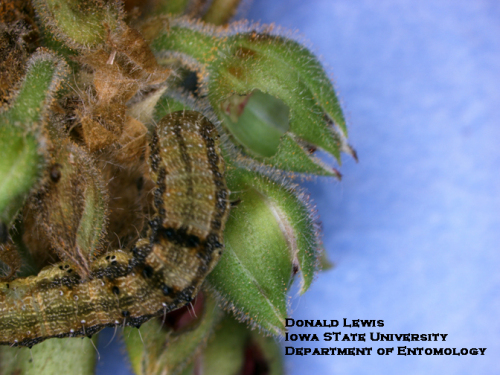 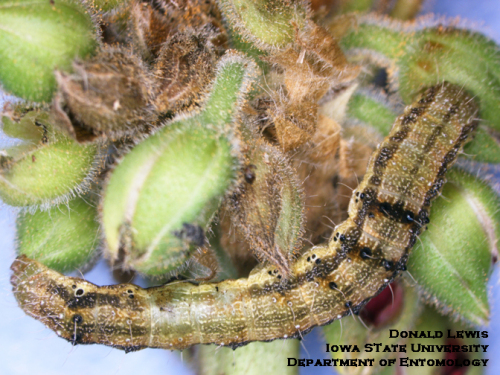 Geranium budworm with head inside the damaged bud shown in preceding photo.

Links to this article are strongly encouraged, and this article may be republished without further permission if published as written and if credit is given to the author, Horticulture and Home Pest News, and Iowa State University Extension and Outreach. If this article is to be used in any other manner, permission from the author is required. This article was originally published on October 12, 2011. The information contained within may not be the most current and accurate depending on when it is accessed.