By Mark Shour, Department of Entomology

In May, 2010, four larvae of the invasive beetle, emerald ash borer (EAB), were found under the bark of one ash tree growing on Henderson Island in the Mississippi River, in northeast Allamakee County, Iowa (2 miles south of Minnesota). The news was not unexpected, as EAB was found across the Mississippi River in southwest Wisconsin (April 2009) and across the border in southeast Minnesota (April 2010).

Since that initial discovery, no additional EAB infestations have been found in Iowa.

The result of all these various efforts to look for emerald ash borer during 2010 is that the only site confirmed to have EAB in Iowa is Henderson Island, in the Mississippi River, in Allamakee County.  In addition to the initial EAB find (one tree), one positive purple sticky trap (13 adult specimens) was found there. To date, no other site in Iowa has been confirmed with EAB.

Starting January 1, 2011, IDALS will require all firewood sold in Iowa to have the county and state of harvest location on the label packages and the delivery ticket for bulk firewood. It is hoped that this will slow the primary long-distance spread of this destructive insect. See the firewood regulation article in this newsletter.

EAB is a small dark metallic green beetle, about as long as Mr. Lincoln’s image on a penny. Adult beetles produce minor feeding damage to ash leaflets, but the flat, white, legless larvae kill ash trees by cutting through the plant’s internal plumbing just beneath the bark. Trees affected display thinning/dieback of branches in the crown, water sprouts (epicormic shoots) along the trunk and major branches, “D-shaped” exit holes cut through bark, and extensive woodpecker feeding on the tree.

This pest was first discovered in Detroit, Michigan in 2002. Since that time, people have unknowingly transported EAB into 14 other states (IA, IL, IN, KY, MD, MO, MN, NY, OH, PA, TN, VA, WI, and WV) by moving infested firewood, landscape trees, and other ash wood products. The USDA PPQ has states/counties under quarantine in an effort to slow the spread.  See the US Forest Service distribution map.

Things that can be done to help Iowa minimize the spread of EAB are: 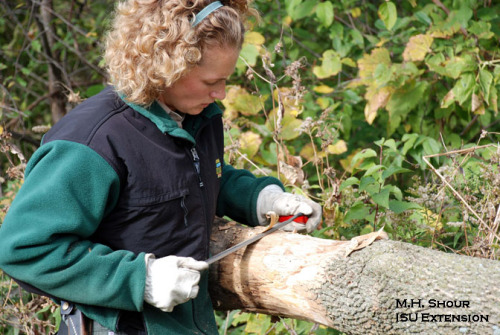 Links to this article are strongly encouraged, and this article may be republished without further permission if published as written and if credit is given to the author, Horticulture and Home Pest News, and Iowa State University Extension and Outreach. If this article is to be used in any other manner, permission from the author is required. This article was originally published on January 12, 2011. The information contained within may not be the most current and accurate depending on when it is accessed.