This Garden is for the Birds -- Hummingbirds!

I have noticed late this summer that several hummingbirds are visiting some of the flowers in my garden. I am surprised – partly because it is late in the season and also because I do not have any hummingbird feeders set up in my landscape.

In watching these hummingbirds zip around I have realized several things. First – they are fast! Sometimes too fast for me to tell which species of hummingbird is visiting. The second thing I noticed is the variety of flowers that they visit. Since I am a gardener, I want to know which flowers they find most attractive. Since I can't ask them (or at least I don't expect a response), I am stuck with watching them instead.

Many garden books suggest planting red or orange, tubular flowers in a sunny site to attract hummingbirds to the garden. Yet, I see them visiting pink, white, and lavender flowers too! I have even seen hummingbirds visit zinnias or coreopsis which have a daisy-like flower instead of a tubular flower.   And are sunny sites a requirement? I don't think so, especially when I see them visiting hosta flowers in my garden this summer.

Maybe hummingbirds aren't as discerning as we initially thought. Maybe they are like us and like a diverse palette of plants. Or maybe they try these different plants simply because they are available. Regardless of their preferences, I like having them visit my garden and/or landscape.

While it may be a bit late to put out a hummingbird feed this year, generally late summer and early fall is a great time to install a hummingbird feeder – especially if you don't have a variety of flowers for them to visit. Hummingbirds are migratory birds that travel great distances from early spring to late fall. They are often in Iowa in April and May as they head north for the year and back again in August and September as they migrate south for the winter.

Below is a list of plants often referenced as attracting hummingbirds to your garden.  But don't worry if many of these are not planted in your garden, because I can attest that they will visit other flowers too! 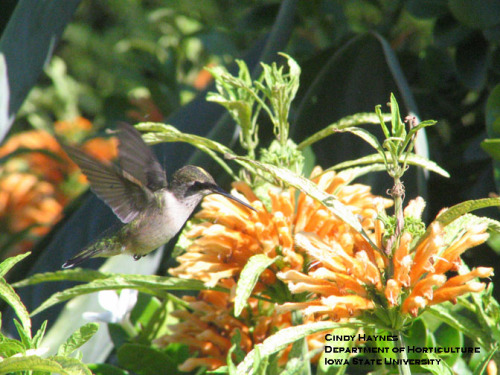 Links to this article are strongly encouraged, and this article may be republished without further permission if published as written and if credit is given to the author, Horticulture and Home Pest News, and Iowa State University Extension and Outreach. If this article is to be used in any other manner, permission from the author is required. This article was originally published on September 29, 2010. The information contained within may not be the most current and accurate depending on when it is accessed.