Why so Many Dragonflies?

Alert readers across Iowa and in neighboring states are asking, "Why are there are so many dragonflies this summer?" I'm not sure what explains this larger-than-normal number of dragonflies but callers are reporting anywhere from "dozens" to "hundreds" of dragonflies flying in swarms during late afternoon to early evening.

Excessive rainfall in this year does not explain the abundance. Dragonflies develop as nymphs in rivers, streams and lakes. Most take at least one year to develop from the egg to the adult stage, and some take 2 or 3 years. So the swarmers you see now are at least one year old and probably two. These are the offspring of last year’s adults (if not the adults that were flying back in 2008 or 2009). To me, that means this year’s abundance is related to what happened 1 to 3 years ago, and not what happened 1 to 3 months ago. In fact, I predict that dragonfly numbers will be down in the next 1 to 3 years as flooding of 2010 may have been detrimental to nymphs in flooded streams. More water in the stream, and especially flooding, would seem to work against the dragonflies, not for them.

What we do know is that dragonflies are more numerous in high-quality water, so abundance is an indicator of healthy aquatic ecosystems, and that's a good thing.

Dragonflies are often observed long distances from the nearest water. It appears they travel long distances and then congregate (“swarm”) in areas where there is a plentiful flying food source such as emerging winged ants, mosquitoes, etc. Yes, dragonflies eat mosquitoes, but it’s apparent they are not keeping up with this year’s bumper crop. 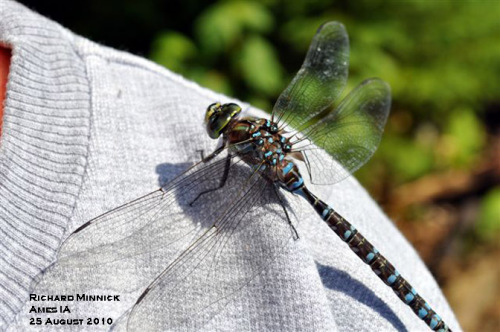 Links to this article are strongly encouraged, and this article may be republished without further permission if published as written and if credit is given to the author, Horticulture and Home Pest News, and Iowa State University Extension and Outreach. If this article is to be used in any other manner, permission from the author is required. This article was originally published on August 25, 2010. The information contained within may not be the most current and accurate depending on when it is accessed.