There are several species of hawk moths that feed on nectar from deep throated flowers in the fall of the year. Because these large, stout-bodied moth behave in a manner similar to hummingbirds (except the moths usually feed in the evening), they are called hummingbird moths.  This is a bit misleading since there is one species that has the official name of hummingbird moth, but for the entire group, "hummingbird moth" is a convenient nickname.

Hummingbird moths are large and about the size of a hummingbird. There the physical resemblance ends. The moths have fuzzy bodies and antennae, both characteristics never found in birds. However, it is remarkable how much the moths behave like hummingbirds. They hover in mid-air and flit from one flower to the next. Favorite flowers include deep-throated blossoms such as petunias and hosta blooms. With a very rapid wingbeat, they are capable of hovering in mid air just in front of flowers as they sip nectar through their extended proboscis. A tiny amount of nectar is withdrawn during a brief visit to each flower.
The hummingbird moths are several different species of sphinx moths, also known as hawk moths (Family Sphingidae). These are medium to large-sized moths with a robust body and narrow, elongate front wings. The wings have the shape of a wide, flat triangle ending in an acute angle at the farthest point. Sphinx moths may have a wingspread of up to 6 inches though a more common size in Iowa is a 2 to 4.5 inch wingspan. There are approximately 125 different species of sphinx moths in the U.S. and Canada.
The most commonly observed hummingbird-like moth is the whitelined sphinx, Hyles lineata, so named for the broad white stripe running diagonally to the outer tip of each front wing. This is a stout-bodied, brown moth with a wingspan of 2.5 to 3.5 inches. The delicate pink coloration of the hind wings is visible when the moths are hovering at flowers. Whitelined sphinx moths are as likely to fly during the day as they are at twilight. The tobacco hornworm moth is another common species.
Hummingbird moths are completely harmless. Their nectar-sipping activity causes no harm to the flowers. Even the hornworm caterpillar stage of most hummingbird moths is of relatively minor importance. Treatment is not warranted. Just enjoy the show! 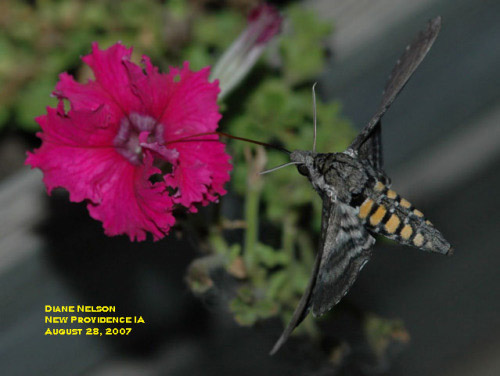 A tobacco hornworm ("hummingbird moth") uses its long proboscis to sip nectar from a petunia flower.

Links to this article are strongly encouraged, and this article may be republished without further permission if published as written and if credit is given to the author, Horticulture and Home Pest News, and Iowa State University Extension and Outreach. If this article is to be used in any other manner, permission from the author is required. This article was originally published on July 28, 2010. The information contained within may not be the most current and accurate depending on when it is accessed.