Control of Birdsfoot Trefoil in the Lawn

Birdsfoot trefoil (Lotus corniculatus) is a conspicuous plant in some lawns in June and July. Grown for pasture and hay, birdsfoot trefoil has escaped to roadsides and waste areas. It is also an occasional weed in lawns as it adapts well to mowing and other lawn practices.

Birdsfoot trefoil is a long-lived perennial legume. The plant has an upright spreading growth habit and can reach a height of 2 feet. The dark green leaves of birdsfoot trefoil appear to be composed of 5 leaflets. However, the compound leaves actually consist of 3 leaflets and 2 broad leaf-like stipules at the base of the leaf stalk. Plants produce small, pea-like flowers. Flowers are bright yellow to orange-yellow. A cluster of three to eight flowers are borne atop each flower stalk. The one-inch-long fruits (seed pods) somewhat resemble the toes on a bird's foot, hence the common name of birdsfoot trefoil. At maturity, the pods split and the halves twist, scattering the seeds. In lawns, mowers also help to scatter the seeds.
Birdsfoot trefoil is native to Europe and Asia, but it has become naturalized in parts of the United States. It tolerates compacted, infertile, and poorly drained soils. Birdsfoot trefoil is also drought and salt tolerant.
Birdsfoot trefoil in lawns can be controlled with broadleaf herbicides. The most effective broadleaf herbicides are combination products that contain two or more compounds. Compounds commonly found in combination products include 2,4-D, MCPP, MCPA, dicamba, and triclopyr. 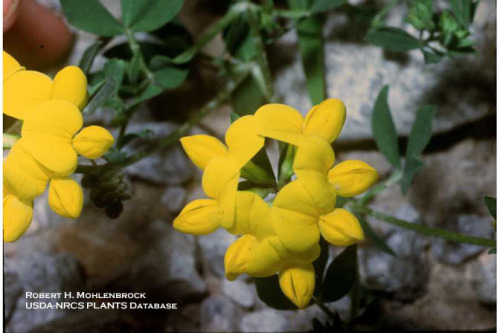