By Fanny Iriarte, Plant & Insect Diagnostic Clinic and Dave Minner, Department of Horticulture
During the first and second weeks of June there were several calls, samples and photos about dying lawns in Ames and central Iowa received by the ISU Plant & Insect Diagnostic Clinic, the Horticulture Hotline and extension turfgrass specialist Dr. Dave Minner. Picture 1 below shows the typical, extensive damage in a well maintained Kentucky bluegrass lawn. In many cases neighboring lawns looked healthy and green.
The disease causing this problem has been identified as Ascochyta leaf blight. Ascochyta leaf blight cause large irregular patches of turf to quickly turn straw-brown in color and appear dead (Picture 2).  From a distance the symptoms resemble drought stress. The difference is that the symptoms of Ascochyta may appear quickly or overnight.  Infected leaves present a bleached tip dieback and the margin between healthy and disease shows a slightly pinched appearance. Some leaves may have uniform lesions that affect the entire leaf blade.
The fungus survives as mycelium and fungal structures called pycnidia on dead leaves or clippings in the thatch.  Hundreds of fungal spores emerge from pycnidium during wet weather and are dispersed by water, mowing or other activities.  The fungus generally enters plants soon after grass is mowed and begins to grow from the freshly cut end toward the leaf base (Picture 3).  Ascochyta blight is known to occur on drought-stressed turf and also during periods of hot weather preceded by wet conditions
To manage the disease, reduce thatch by core aeration at least once a year to allow better water penetration. Maintain grass height between 2.5 and 3 inches.  When disease is present reduce mowing frequency and increase mowing height.  Avoid mowing during wet weather as it will harm the turf and provide more infection points for the pathogen.  Also, it is recommended to avoid excessive nitrogen fertilization especially in the spring, and try to maintain uniform soil moisture and good drainage. Collecting clippings to reduce fungal inoculum has not reduced disease severity.  Ascochyta blight disease development is sporadic and rapid, so fungicide spray is not recommended. Turf may look dead from a distance, but the blight does not affect bluegrass crowns and roots. Therefore, grass will recover in 2 to 3 weeks or longer depending on weather conditions.
Several lawns where the disease was observed 10 days ago in Ames and Ankeny have already shown quick recovery aided by the almost daily rainfall that followed the weather events that incited the disease. See below for photos of affected lawns as they appeared on June 11 and how they looked on June 21. Some lawns where the disease started later might still take some more time to recover. Mowing will remove affected plant parts and start the turf looking greener.
For more information about this disease and questions and answers please refer to the Iowa Turf Blog. 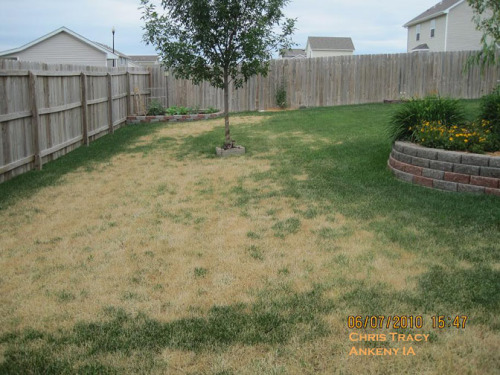 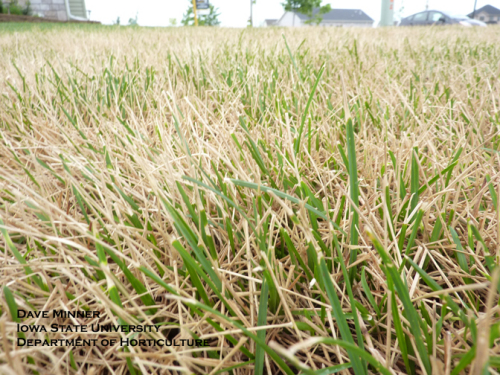 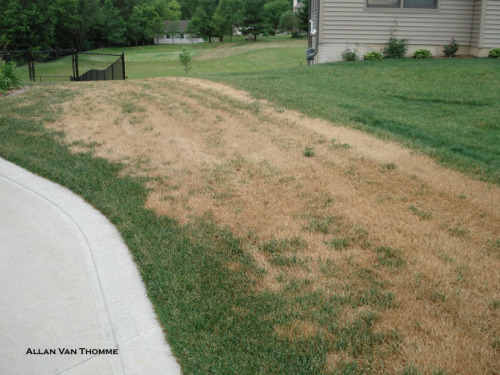 Picture 3. Ascochyta damaged turf where spores might have been spread by the mower. 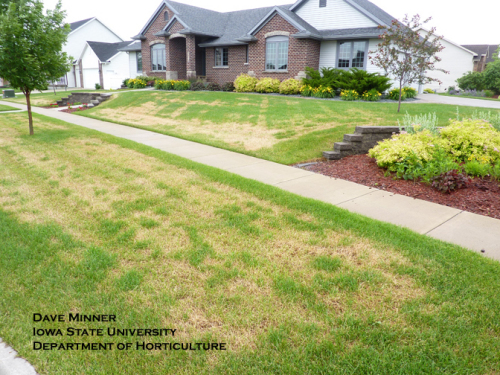 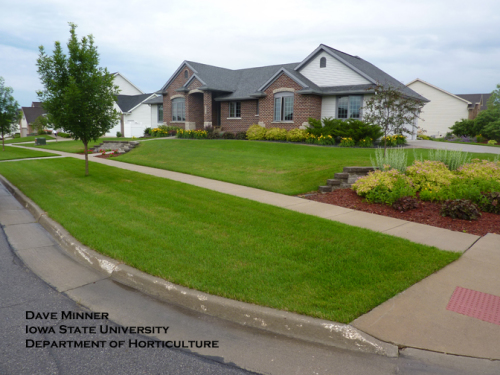 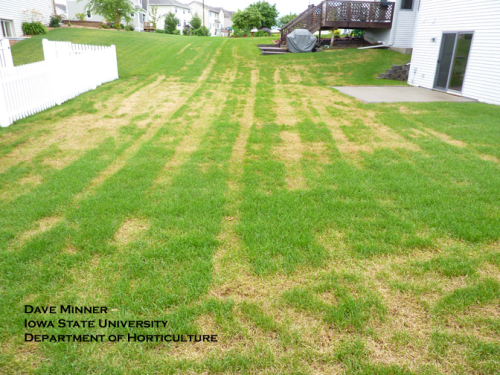 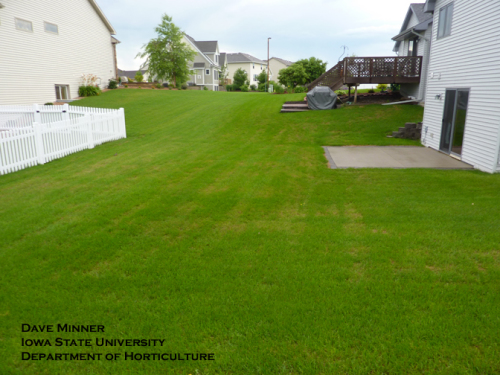