The first reports of the Japanese beetle for the year have been received.   And so it starts.

The Japanese beetle has been one of the most troublesome urban insect pests in the eastern U.S. since it was imported into New Jersey with ornamental plants from Japan in about 1916. It has spread on its own and with nursery stock and sod throughout the eastern half of the U.S. Japanese beetles have been present in Iowa since 1994 and have been reported in 44 of Iowa's counties. See the map below.
Adult Japanese beetles are present from late June through August. They feed on the foliage and fruits of over 350 kinds of plants but are best known as pests of fruits, vegetables, garden flowers, trees and shrubs. Their feeding causes scarring on the surface of fruits and chewing damage on leaves and destruction of flowers. They prefer roses, raspberry, grape leaves, and crabapple and linden tree foliage.
Control of adult beetles is difficult because they emerge daily for a period of several weeks.  Handpicking or screening on high-value plants may be of benefit in isolated situations with limited numbers of beetles.  Spot spraying infested foliage of high value plants with carbaryl (Sevin), permethrin (Eight) or cyfluthrin (Tempo) may reduce damage for several days, but multiple applications are required to maintain control.  Spraying the adult stage is not an effective strategy for prevention of grub damage to turf, and treatment of turf does not prevent adult damage to ornamental plants.
Tree foliage can be protected with a soil-drench application of systemic insecticide, though best results are achieved when treatments are applied several weeks ahead of beetle emergence. See this news release from the University of Illinois for more details.
Use of a floral lure and sex attractant traps is not recommended.  Research at the University of Kentucky showed that the traps attract more beetles than they catch, and plants near the traps may have more damage than if no traps are used at all.
Please report new county records of Japanese beetle in Iowa.
Part of our response to the discovery of a new insect species within the state is to document its spread and establishment. If you find beetles that you suspect are Japanese beetles in areas with no previous reports, please send specimens or digital images to Extension Entomology, ISU, Ames IA 50011 (insects@iastate.edu) for confirmation and recording as a new county record. 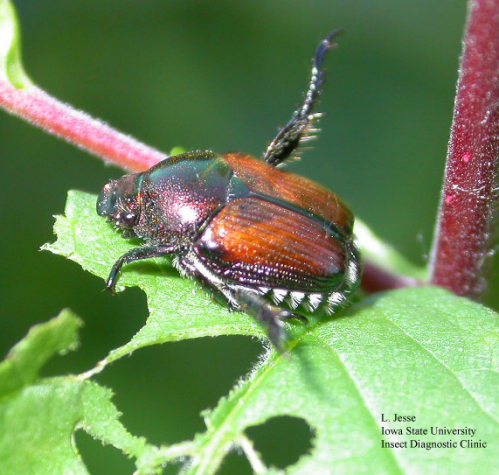 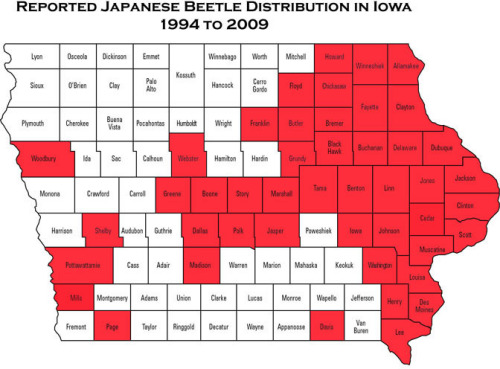 Counties in Iowa where Japanese beetles have been previously reported.