The following are highlights and updates about samples and questions recently received in the Clinic:

Ant mounds in lawns continue to annoy and disturb homewoners.  See the HHPN from May 6, 2009 for control suggestions.

Eastern Tent Caterpillar infestations mentioned last issue appear to be been confined to the north-eastern and north-central portions of the state.  The caterpillars are nearly done feeding by now and it is too late for effective control.  Defoliated trees will releaf soon.  Be patient and provide "TLC."

Cottony Maple Scale.  So far we have received one report of cottony maple scale on silver maple.  See the photo below for what the scales look like before the large, cottony egg sac forms in June and early July.  Our records indicate we have not had an outbreak of cottony maple scale since 1995. See the HHPN on June 23, 1995 for details.

There is no way to know how widespread or abundant cottony maple scales will be. The report from Bob Hauer could be the tip of the iceberg, or it could be the only report we receive. Time will tell.   The only reason most people will ever notice cottony maple scale is because of the "sap" (technically called honeydew) that drips from the tree onto people, patios and vehicles parked below. See the article elsewhere in this newsletter for more about honeydew dripping from trees.
Treatment of cottony maple scale with insecticides is generally believed to do more harm than good. Spraying kills the natural enemies and prolongs the infestation. The recommended action is, "live with it."

Spiny Elm Caterpillar.  The caterpillar of the mourningcloak butterfly is called the spiny elm caterpillar.  As the name implies it feeds on the foliage of elm trees, but also foliage of willow, birch and hackberry.  Todd Derifield reported an unusually large number on a hackberry tree in Waterloo (photo below).  In spite of tree owner's distress over the mess ("frass and smashed caterpillars on the driveway") control was not recommended because of the large size of the caterpillars, PLUS the fact that these caterpillars become interesting butterflies. 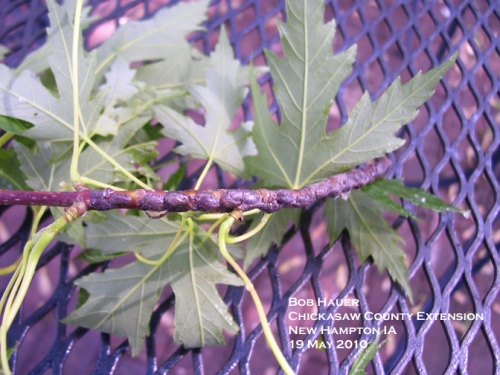 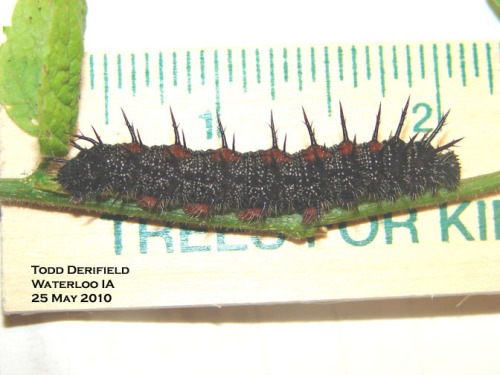 Links to this article are strongly encouraged, and this article may be republished without further permission if published as written and if credit is given to the author, Horticulture and Home Pest News, and Iowa State University Extension and Outreach. If this article is to be used in any other manner, permission from the author is required. This article was originally published on May 26, 2010. The information contained within may not be the most current and accurate depending on when it is accessed.