Look out for Thousand Cankers Disease in Black Walnut Trees

As reported earlier, the recently-recognized disease called thousand cankers of black walnuts has not been found in Iowa or other parts of the black walnut tree (Juglans nigra) native range (Fig. 1). See articles by ISU plant pathologist Dr. Mark Gleason "Why You Should Worry about Your Walnuts" and "New threat to Iowa Trees – Thousand Cankers Disease of Black Walnut". Thousand cankers disease is present in western USA and it remains a potential, serious threat to black walnut trees throughout the country. This article answers frequently asked questions about this potential threat and to remind Iowans to be on the lookout for this disease.

The first Thousand Cankers Disease of Black Walnut National Conference was held in St. Louis, Missouri on November 3-4, 2009. Participants from 24 States discussed potential national responses to protect black walnut in its native range. A national taskforce is being developed and federal agencies are working together to coordinate survey, outreach and regulatory efforts.

Thousand cankers disease causes a rapid decline in walnut trees followed by tree death. It has been observed for little more than a decade in western states (mainly Utah, New Mexico, Idaho and Oregon) and since 2001 in Colorado. In 2008,   Ned Tisserat, plant pathologist at Colorado State University, first identified the fungus involved in the disease and placed it in the genus Geosmithia sp. The fungus is vectored by the walnut twig beetle (Pityophthorus juglandis) (Fig.2).  The twig beetles carry the fungus to uninfected trees. As the fungus infects the bark cambium tissue, twigs, branches and eventually entire trees are killed by multiple infections and small dead areas called cankers (Fig.3), hence the name "thousand cankers disease". The walnut twig beetle is native to North America and has been found in western U.S. (WA, OR, CA, ID, UT, AZ, NM and CO). It has not been found in eastern U.S.

What to look for

Symptoms in infected trees often progress from the top of the tree downward. The early symptoms may be wilting and yellowing of the foliage and thinning (dieback) of the top branches (Fig. 4). In later stages of the disease dead branches in late spring or summer brown, dead leaves remain attached to the twigs. Finally, large areas of foliage quickly wilt and the tree dies within three years of initial infection. Small beetle entry holes in the bark will be seen (Fig. 5) but the cankers for which the disease is named cannot be observed until the outer bark is removed.  Thousand cankers-infected trees will have numerous small or large cankers under the bark with beetle galleries (tunnels) in the middle of the cankers.  Multiple cankers may be observed.  For more information about the insect vector and cankers see Colorado State University  Pest Alert "Walnut Twig Beetle and Thousand Cankers Disease of Black Walnut".

How does the disease spread?

The United States Department of Agriculture, Plant Protection and Quarantine (USDA-PPQ) reported potential pathways of infested wood movement to be: timber, firewood, wood packaging material, nursery stock (no report of affected nursery stock in the West by early November 2009), scion wood for grafting (un-documented trade by individuals may occur).   Nuts are not a concern since this pathogen is not systemic or seed-borne. The disease most likely would enter Iowa by human activity such as movement of firewood, untreated wood or logs. Natural spread (wind and water) is unlikely since this pathogen (Geosmithia sp.) requires a vector and the Great Plains are considered by many to be a natural barrier due to limited host plant material.

There is no feasible control of the fungus or insect vector. Rapid detection and prompt removal of infected trees is the best management practice. If the disease is detected in Iowa, owners would have to take specific measures necessary to prevent the spread of disease following USDA-PPQ regulations and instructions for proper wood disposal. In most cases, wood will need to be chipped, and cannot be kept for firewood and/or woodworking.

How you can help

Leaf yellowing/flagging of black walnut can be a symptom of several, less important problems. To accurately diagnose or rule out thousand cankers disease submit a sample for diagnosis to the ISU Plant and Insect Diagnostic Clinic, 327 Bessey Hall, ISU, Ames, IA 50011.  A sample should consist of 2 to 4 branch pieces with symptoms. Select samples about 2 feet long from branches or the tree with a diameter of 2 to 4 inches. Bag the samples and send in a box along with the Plant Disease Identification Form. Be sure to include information on where it was collected.   If you observe the characteristic symptoms of the disease after peeling the bark (cankers and beetle gallery in center of canker) you can also contact directly the Iowa Department of Natural Resource, Forestry Bureau at 515-281-4915 or ISU Extension Forestry at 515-294-1168. 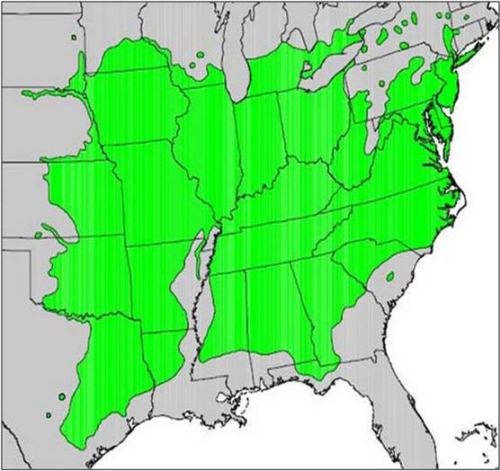 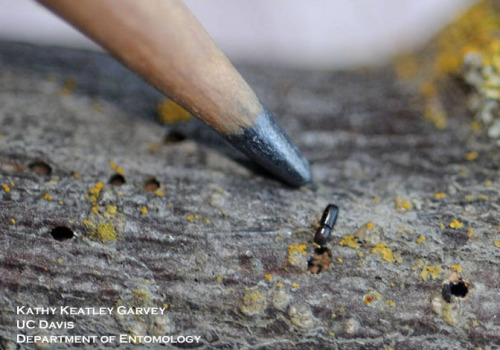 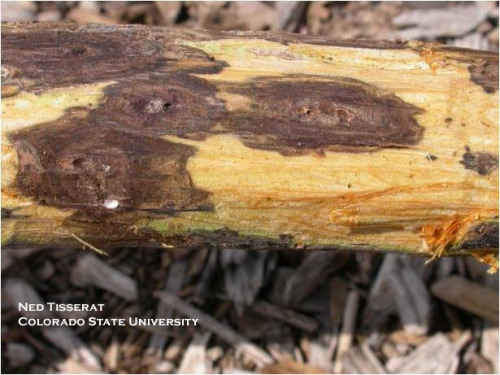 Fig. 3. Cankers caused by Geosmithia sp. fungus. Note beetle galleries in the middle of the cankers. 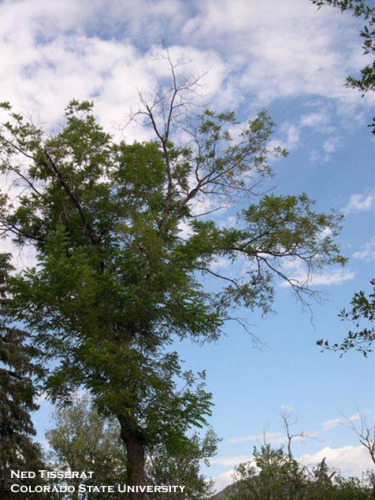 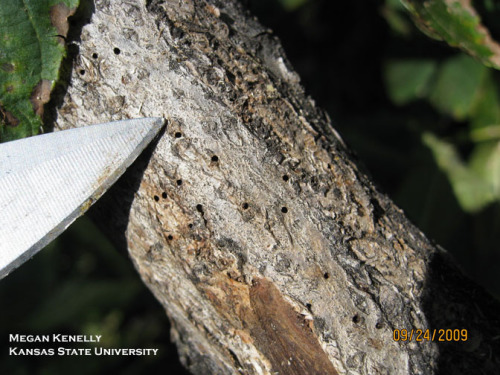 Fig. 5. Twig beetle entry holes in the bark above cankers.

Links to this article are strongly encouraged, and this article may be republished without further permission if published as written and if credit is given to the author, Horticulture and Home Pest News, and Iowa State University Extension and Outreach. If this article is to be used in any other manner, permission from the author is required. This article was originally published on February 3, 2010. The information contained within may not be the most current and accurate depending on when it is accessed.