Below is an updated map that indicates our best guess on where eastern subterranean termites occur in Iowa. In our records and conversations we have been able to document that 94 Iowa counties have reported termites. In other words all but 5 counties have had activity by termites reported at one time or another.

Termites are widespread in Iowa, but they are also a spotty and highly localized pest. That is, termites vary greatly from place to place, not only within the state but within a county and even within a neighborhood. Just because a county appears in red on this map does not mean every house in that county has termites. It just means that somewhere within that county termites are reported as a pest.

Our earliest records of termite activity in Iowa go back to the era of the late Dr. Harold "Tiny" Gunderson, ISU Extension Entomologist from 1936 till his untimely death in 1971. "Tiny" and his colleagues were very good insect collectors and good record keepers. Thus we have an accurate account of where termites were known to occur. Our knowledge was further updated with a state-wide survey in 1988, and then added to over the years as county extension offices, pest control professionals and homeowners call in with observations and reports. The combined results of past records, survey results and personal accounts confirm the generally-assumed assumption that "termites are present in almost every county in Iowa."

In general, termites are most common in the southern half of the state, with activity rated as "low" in the northern half by the US Forest Service. However, exceptions do occur, often within short distances. Some northern counties, especially counties with major urban areas and major rivers have moderate to high levels of termite activity. Meanwhile, southern counties such as the south central counties of Clarke, Lucas, Monroe and Wayne report little or no termite activity. In these and many of the northern counties (indicated in yellow in the accompanying map) termites have been collected at some time in the past, but levels are apparently at such low levels that the local extension staff do not receive questions about them.

For more information about termites, refer to pamphlet Pm-1496, "Selecting a Termite Service." Anyone with information contrary to what is indicated here is encouraged to contact me so our information can be corrected and updated. 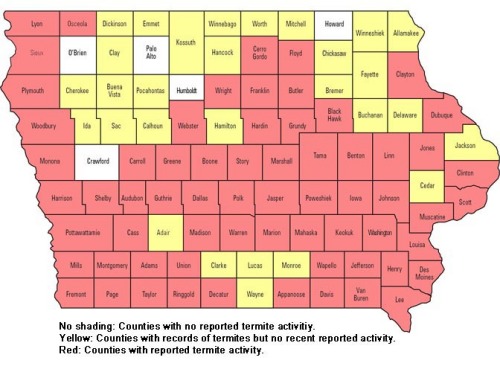 Links to this article are strongly encouraged, and this article may be republished without further permission if published as written and if credit is given to the author, Horticulture and Home Pest News, and Iowa State University Extension and Outreach. If this article is to be used in any other manner, permission from the author is required. This article was originally published on October 27, 2010. The information contained within may not be the most current and accurate depending on when it is accessed.