Next time you are outside on a sunny winter day take a close look at the snow, especially where it has melted a bit around the base of trees or house foundations, for a small insect called the snow flea. Snow fleas will look like someone spilled pepper on the top of the snow but if you look closely you will see them moving.

The snow flea is one of the very few insects that remain active in the winter; they are believed to be feeding on fungal spores and algae on the surface of the snow. They have a unique compound in their body that basically serves as anti-freeze, allowing them to be active when most other insects, and humans, are seeking shelter.
Despite its name the snow flea is not a flea, it is part of a group of insects called springtails. Springtails are harmless insects found in damp areas where they feed on fungi and decaying organic matter. Springtails get their name form their ability to use a tail-like apparatus to jump. There are many different species of springtails, but most are not active in the winter. Springtails can also easily be found in the summer in the soil, under leaf litter, in decaying logs, and other areas that are moist with organic matter.  Springtails are actually very abundant but tend to get overlooked because of their small size – less than a millimeter to several millimeters in length. 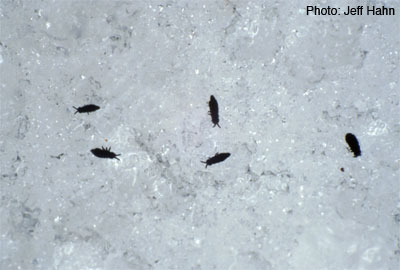 Links to this article are strongly encouraged, and this article may be republished without further permission if published as written and if credit is given to the author, Horticulture and Home Pest News, and Iowa State University Extension and Outreach. If this article is to be used in any other manner, permission from the author is required. This article was originally published on January 6, 2010. The information contained within may not be the most current and accurate depending on when it is accessed.