Spur blight is a disease of red raspberries caused by the fungus Didymella applanata. The fungus survives during winter on infected canes and fungal inoculums come from old fruiting canes.  The fungus produces spores in tiny, black structures in the diseased bark, especially near the bud. These structures release spores during wet weather that are spread by rain, wind, and irrigation water. Fungal spores that land in the moist areas near buds on young canes may cause new infections (Fig.1)

Mature leaves are susceptible, but young leaves appear to be resistant to spur blight.  Fungal spores that are splash-dispersed during heavy rain in July and August have been associated with the appearance of nodal lesions.   As the plants form a canopy that excludes light from the base of canes later in the growing season, the oldest leaves become susceptible. Spur blight infections begin on the edge of older leaves (Fig. 2) and cause brown v-shaped lesions (Fig. 3). The infection advances to the mid vein and then into the bud that forms at the base of the leaf in the leaf spur. A dark brown v-shaped lesion develops at the base of the buds. Overwintering lesions become silvery grey. Prolonged mild temperatures in the fall increase the likelihood of infection of nodes and bud failure at the following spring.

Spur blight can be minimized in raspberries by rigorous pruning to control the number of canes in a row, so that the overall row width does not exceed 14 inches at the base.    Any practice that opens the plant canopy to ensure rapid drying of leaves and canes after rain is beneficial.   Similarly, it is important to control weeds and remove cane suckers that arise between and within rows.   Because D. applanata is specific to raspberries and survives the winter only on canes, complete removal or burning of all overwintering canes can greatly reduce incidence of the disease in fall-bearing red raspberries.

Several contact and systemic fungicides can be used to control spur blight.   An application of  lime sulfur prior to spring growth is widely recommended.  Additional sprays used for control of Botrytis fruit rot are also beneficial.  Control information can be found in the Midwest Commercial Small Fruit and Grape Spray Guide.

For those who want to learn some more about this disease and other diseases of raspberry see "The New York Berry News" at www.fruit.cornell.edu. 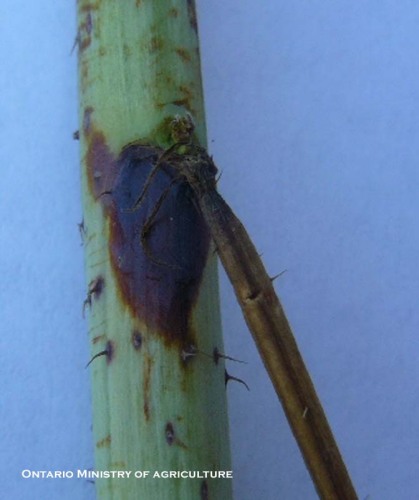 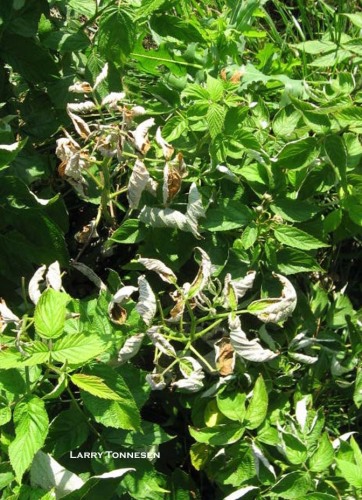 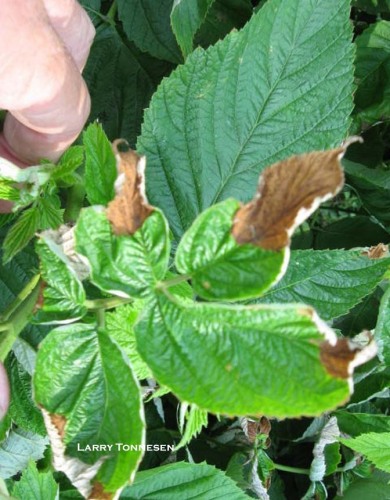 Links to this article are strongly encouraged, and this article may be republished without further permission if published as written and if credit is given to the author, Horticulture and Home Pest News, and Iowa State University Extension and Outreach. If this article is to be used in any other manner, permission from the author is required. This article was originally published on July 29, 2009. The information contained within may not be the most current and accurate depending on when it is accessed.