Few objects of terror are as alarming to a hostaphile (obsessed lover of all things hosta) as petiole rot, a devastating fungus disease formerly known as hosta crown rot. The first reports of symptoms this season have started to arrive so now is a good time to update the following article written in July, 2004 by Paula Flynn, former Extension Plant Pathology Diagnostician.

Petiole rot is a very serious disease of hosta caused by the fungus Sclerotium rolfsii var. delphinii. The fungus has a very wide host range, so it can be a problem on many garden plants.  Disease symptoms on hosta start as marginal yellowing and browning of the leaves, lower leaves first. A soft, brown, mushy decay may be seen at the base of the petiole sometimes accompanied by white fungal threads.   As the disease progresses the leaves discolor and wilt.  In the final stages of the disease the base of the petioles is rotted away and the leaves collapse and lay flat on the ground.  Collapsed leaves pull easily from the crown of the plant.

The disease fungus produces small round fungal fruiting structures about the size of mustard seeds that appear at the base of the infected petioles. These structures, called sclerotia, are a cream color when young, but then progress to a dark, brick red color. The sclerotia are long-term survival structures of the fungus.   Sclerotia germinate during warm, humid weather and fungal mycelium grows in the ground until it finds a susceptible plant nearby.

Effective management requires a combination of strategies. Avoid planting any suspect or symptomatic plants. Avoid moving plants from contaminated beds to other parts of the garden.  Use good sanitation practices such as removing infected plants and carefully removing the surrounding soil to a depth of 6-8 inches and replacing it with non-contaminated soil .  A mulch free zone of several inches at the base of susceptible plants might also help.  Hosta cultivars differ in susceptibility to this disease; some tolerant cultivars (less susceptible) are Halcyon, Honeybells, Snow Mountain and Tall Twister. Susceptible cultivars include Lemon Lime, Munchkin, Nakaiana, Platinum Tiara and Tardiflora.

Fungicides such as flutolanil or thiophanate-methyl based fungicides like Cleary 3336 or Fungo  are available to help control the disease, but may not be readily available to the home gardener.   Common garden fungicides and home remedies such as bleach are not effective.  In short, there are no easy answers and prevention is the best option.

To learn more about this disease  and other diseases and pests of hostas see ISU Extension bulletin SUL14, “Hosta Diseases and Pests.”   Photos are online at the Hosta Library. 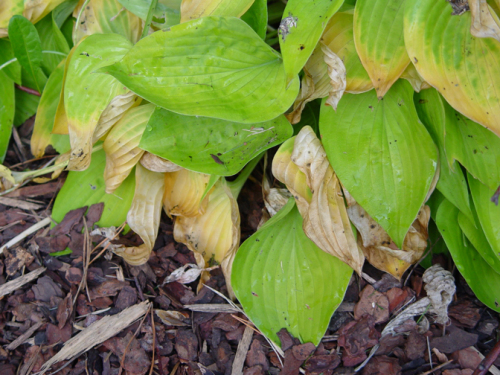 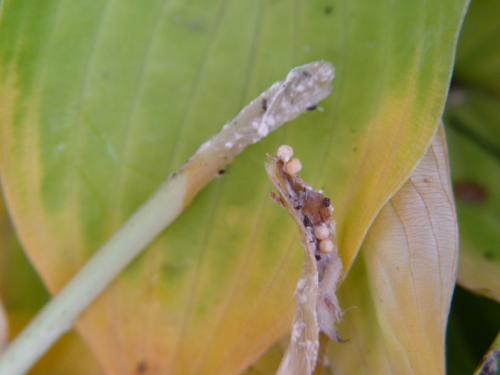 Links to this article are strongly encouraged, and this article may be republished without further permission if published as written and if credit is given to the author, Horticulture and Home Pest News, and Iowa State University Extension and Outreach. If this article is to be used in any other manner, permission from the author is required. This article was originally published on July 15, 2009. The information contained within may not be the most current and accurate depending on when it is accessed.