Japanese Beetles Are Back!

They're Back! The first reports of Japanese beetles for the year have been received. See photo below for identification details.

Bob Dodds the Lee County Extension Director and incoming Region 20 Regional Extension Education Director reported a few Japanese beetles in his orchard on June 22. Duane Gissel, Extension Horticulturist in Scott County reported the first sighting of JB on the morning of June 29, and by that afternoon was flooded with calls from clients. Most reports were from areas where JB has more recently arrived and residents are not familiar with the pest (Blue Grass and the western parts of Davenport, and Eldridge). On July 1, Doug Struyck reported clumps of beetles on trees and shrubs in the Council Bluffs area.

The current, known distribution of JB in Iowa includes 37 counties as shown on the map elsewhere in this newsletter.

The first issue we face with Japanese beetles will be the feeding by the adults on foliage, flowers and fruit. Later in the summer we can contend with the white grubs - JB larvae feeding on turfgrass roots in the soil. Roses, grapes, raspberries and linden tree leaves are the favorites of the over 300 plants that the JB adults will eat. See the Horticulture and Home Pest newsletter from July 30, 2008 for more details.

Defoliation of linden trees as shown in Jeff Wendel's photo below is usually not fatal to otherwise healthy trees. We don't know what other stresses are occurring so there is no easy way to predict the tree's response to defoliation. Treating grubs in the turfgrass does not impact the beetle populations on the tree the following year. There are way more places for grubs to develop in the soil than can be treated, and the relatively small amount of the total population that is treated does not impact the overall population.

Handpicking or screening of high-value plants may be of benefit in isolated situations with limited numbers of beetles. Spot spraying infested foliage of high value plants with carbaryl (Sevin), permethrin (Eight) or cyfluthrin (Tempo) may reduce damage for several days, but multiple applications are required to maintain control.

In addition to spraying trees two or more times with insecticide for contact control of Japanese beetles, many landscape maintenance workers are reporting good success using systemic insecticides, applied to the soil around the base of the tree at the start of the beetle appearance. The insecticide moves upward and into the leaves and kills the beetles as they feed. Some injury still occurs but less than if the tree is not treated. See the University of Illinois Extension news release from April 16, 2009. 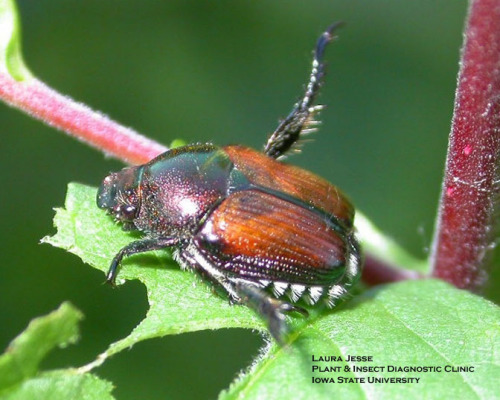 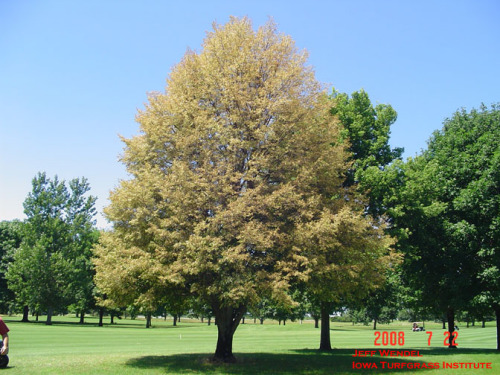 Links to this article are strongly encouraged, and this article may be republished without further permission if published as written and if credit is given to the author, Horticulture and Home Pest News, and Iowa State University Extension and Outreach. If this article is to be used in any other manner, permission from the author is required. This article was originally published on July 1, 2009. The information contained within may not be the most current and accurate depending on when it is accessed.