By Donald Lewis, Department on Entomology

Mike White, ISU Extension Viticulture Specialist reported an interesting and confusing phenomenon found in vineyards this spring. He found semi-hard, pliable droplets attached to the stem. Photo below. One theory was that these were insect or mite eggs except that they are various sizes (insect eggs would be uniform) and that they were clear to translucent (insect eggs are usually milky to opaque and eventually have a developing embryo inside). The droplets could be "bleeding wounds" from grape leafhopper feeding (piercing sucking mouthparts) except the droplets are on the stems rather that the leaves where the leafhoppers feed. Besides, if there were that many leafhoppers, it would be noticeable. The droplets looked like the "semi-hardened sap exudate" we see on ficus (houseplant) from time to time, which turned out to be direction we needed to look.

Here is how Neil Carter, Grape IPM Specialist with OMAFRA described grape pearls: "Grape pearls are small sap-like, fluid-filled balls that are exuded from surface cells of rapidly growing grape vines. They appear most commonly in the spring and are often confused with mite or insect eggs. Some vines have many grape pearls but the pearls can appear singly or in smaller groups. They are usually found on the underside of leaves but can be on shoots as well. Grape pearls, also called "sap balls" are of no consequence to the vine."

Mike continued to examine grape vines for this phenomenon and wrote the following after visiting Summerset winery near Indianola: "I looked at all of their grapes. None of the hybrids had any sap balls but two American varieties, Niagara and Concord were loaded with them." See Mike's picture below and similar photographs in the OMAFRA newsletter referenced above, page 8. Mike reports the vines are alive and doing fine and that no treatment or special action is needed. 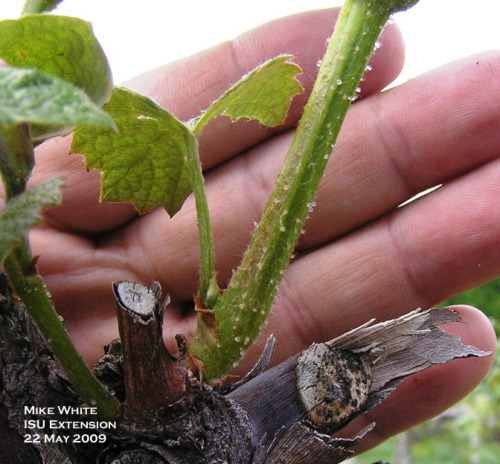 Links to this article are strongly encouraged, and this article may be republished without further permission if published as written and if credit is given to the author, Horticulture and Home Pest News, and Iowa State University Extension and Outreach. If this article is to be used in any other manner, permission from the author is required. This article was originally published on June 3, 2009. The information contained within may not be the most current and accurate depending on when it is accessed.