Columbine Leafminers Leave Quite a Mess

Columbines (Aquilegia spp.) are a popular and versatile flower for the shade garden. The spurred, tube-like flowers are held high above the foliage on long stems creating a graceful flutter of color in the perennial bed.

Columbines are easy to grow in most fertile soils and they re-seed after producing their unique flowers in early spring. Columbines are considered to be low-maintenance; generally you plant them and enjoy them. The one consistent pest problem noticed in the home garden is the columbine leafminer that disfigures the leaves. See photos below. The leafminer is not fatal to the plant, but may be aesthetically displeasing.

The leafminer is a fly larva small enough to squeeze between the top and lower epidermis layers of the soft, blue-green lobed leaves. The leafminer fly lays her eggs on the foliage at about the time the plants start to flower. The larvae tunnel into the leaf where they eat and grow, producing meandering tunnels inside the leaf that grow wider as the insect advances. (photo 2) There are several successive generations per year and by mid-summer plants may have several tunnels per leaf that show as white snake-like streaks winding through the leaves. The tunnels are conspicuous but the injury has little, if any, effect on plant health.

Insecticides are of little help in controlling columbine leafminers and may do more harm than good by eliminating existing natural enemies. The practical control is to ignore them, but if you must do something, pick off attacked leaves as early as possible and discard them. Continue throughout summer. 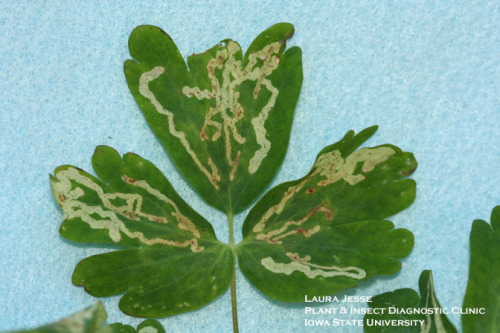 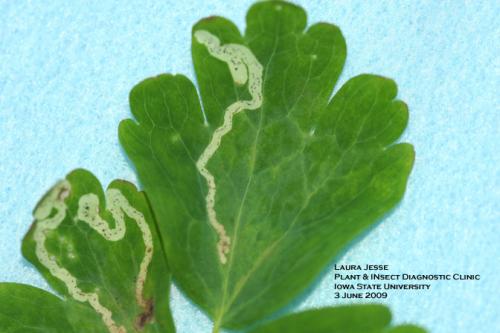 Columbine leafminer tunnels grow wider as the larva inside the leaf grows.

Links to this article are strongly encouraged, and this article may be republished without further permission if published as written and if credit is given to the author, Horticulture and Home Pest News, and Iowa State University Extension and Outreach. If this article is to be used in any other manner, permission from the author is required. This article was originally published on June 3, 2009. The information contained within may not be the most current and accurate depending on when it is accessed.