Diseases of Arborvitae in Iowa

Arborvitae (Thuja spp.) trees and shrubs are appealing and reliable plants for the Iowa landscape with few significant pest or disease problems. Below is a recounting of recent arborvitae disease experiences in the ISU Plant and Insect Diagnostic Clinic.

The clinic received a sample from Afton, IA, of a Giant Green Thuja presenting symptoms and signs of Pestalotia twig blight disease (Fig.1) caused by the fungal pathogen Pestalotiopsis spp. Fungal infection can kill individual needles or complete twigs on thuja, juniper, and other conifers. Black fungal structures were observed on the branchlets but not on the twigs. This is a widespread problem mostly overlooked since the fungus infect mostly the tips of arborvitae and don't usually cause much more damage to the tree. This is a stress related disease and no control is needed besides reducing stress in the trees.

Another arborvitae sample (Thuja orientalis) from Ankeny with a similar but different blighting pattern (Fig. 3) presented signs and symptoms of the disease called Berckmann's Blight caused by the fungal pathogen Seimatosporium berckmanssii (Fig. 4). This fungus attacks Oriental arborvitae and is more important than the one mentioned above since it can cause considerable damage to the tree. The importance and spread of this disease in Iowa is unknown. Small twigs or branches are blighted; turn gray-green then reddish brown; many small branchlets drop; larger limbs may be girdled. Specimen twigs were dotted with black fungal structures bearing hundreds of spores (Fig. 4). As new growth develops in blighted areas the spores can quickly spread the disease to adjacent young foliage or blow with the wind to other trees. If re-infection continues, it can debilitate the plant and even cause stem cankers. Control of this disease consists of removing and destroying blighted twigs to reduce the amount of the fungal spores and stop the spread of the infection. Copper based fungicide spays are recommended to help reduce infections in the spring. Application of copper based fungicide in the fall is a preventive measure. Repeat in late October if new infections are observed.

Reduce the stress to the trees as much as possible, improve growing conditions by watering when needed and mulch the trees to make them less susceptible to these diseases. 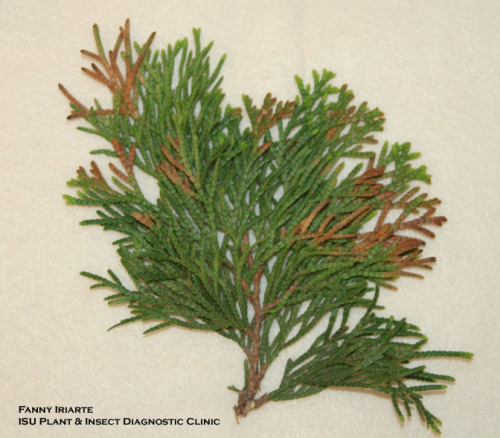 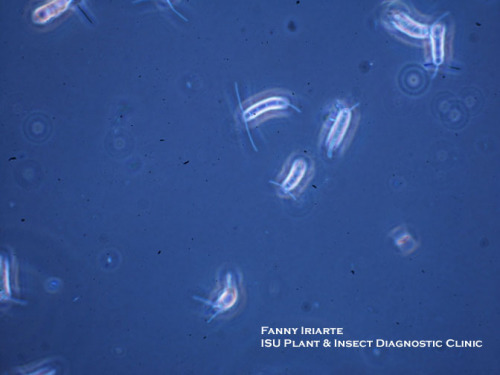 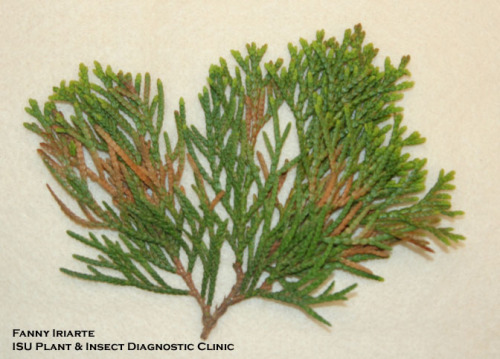 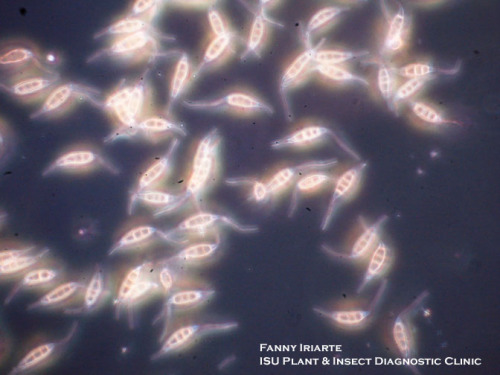 Links to this article are strongly encouraged, and this article may be republished without further permission if published as written and if credit is given to the author, Horticulture and Home Pest News, and Iowa State University Extension and Outreach. If this article is to be used in any other manner, permission from the author is required. This article was originally published on May 6, 2009. The information contained within may not be the most current and accurate depending on when it is accessed.