Alert reader and generous photographer Gary Koehler shared the photos below of an exposed honey bee comb built on rocks along a river in Jackson County, Iowa. The colony was spotted late last November and checked again during the gorgeous warm weather of March 1 when the photos were taken.

It is rare to find an exposed nest of honey bees in Iowa. Fewer than a half-dozen have been reported to Extension Entomology over the past 3 decades, compared to hundreds of reports of baldfaced hornet nests and yellowjacket wasps.

Honey bees almost always build their wax comb in protected, defensible locations to raise offspring and store honey. However exposed nests do happen occasionally, possibly as a result of nest site limitation. Swarms that separate from an existing bee colony usually settle into sheltered locations such as a hollow tree within a day or two.

Living in an exposed nest does not serve the honey bees well as it appears none ever survive the winter or the subsequent attacks by squirrels and birds. Photo number 3 below shows dead brood from starvation and winter kill.

There is no indication that this colony is anything other than the common (though feral) honey bee. Africanized honey bees introduced into Brazil in 1956 have migrated to the southern U.S. but are not likely this far north. 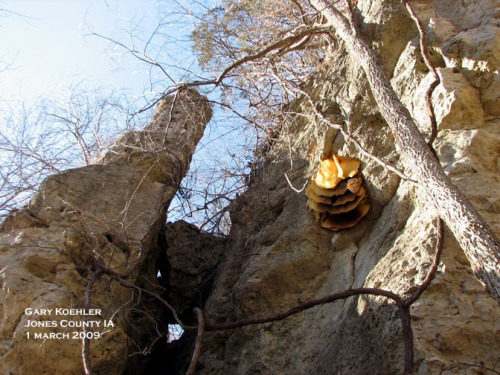 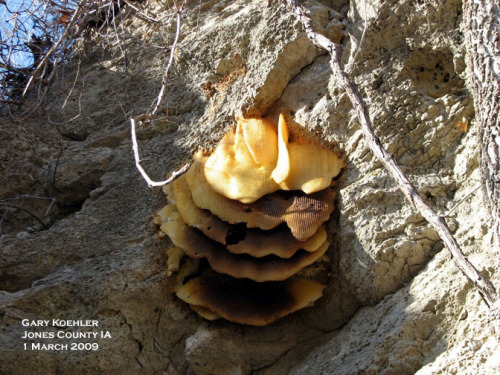 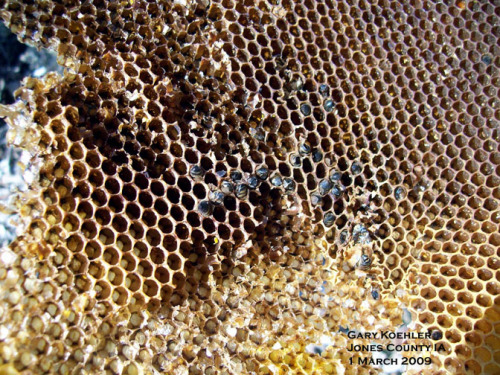 Links to this article are strongly encouraged, and this article may be republished without further permission if published as written and if credit is given to the author, Horticulture and Home Pest News, and Iowa State University Extension and Outreach. If this article is to be used in any other manner, permission from the author is required. This article was originally published on March 11, 2009. The information contained within may not be the most current and accurate depending on when it is accessed.