Cobweb is a term used for messy spider webs in homes, the flimsy webs that sort of drape down and get covered in dust. There is a group of spiders we call the cobweb spiders, but many species of spiders make messy webs we would call cobwebs.

Long-bodied cellar spiders are not poisonous to humans and are actually sort of good guys because they eat insect pests, house centipedes, and other things we do not like in our homes. Long-bodied cellar spiders are difficult to eliminate from a home. Often the spiders and webs are concentrated in a dark, seldom disturbed, basement or cellar area. Insecticides are not very effective at controlling these spiders for a few reasons; 1) the spiders don't move around that much so the chances of them walking through a residual insecticide are not good; 2) even if they do walk through the insecticide they are walking on the tips of legs on claw-like tarsi, and 3) insecticides are often not as effective as we want because spiders are not insects, they are arachnids.

For cellar spider control the best thing is a vacuum with a hose attachment. Systematically move through your house, removing all webs and spiders. Repeat this every few weeks until no new webs are seen. 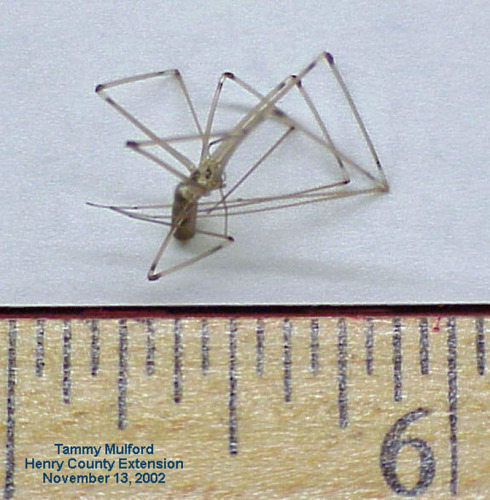 Links to this article are strongly encouraged, and this article may be republished without further permission if published as written and if credit is given to the author, Horticulture and Home Pest News, and Iowa State University Extension and Outreach. If this article is to be used in any other manner, permission from the author is required. This article was originally published on February 4, 2009. The information contained within may not be the most current and accurate depending on when it is accessed.