A Bad Year for Blue Spruce in Iowa

By Fanny Iriarte and Mark Gleason, Department of Plant Pathology

The 2008 growing season was not kind to spruce trees in Iowa. The ISU Plant and Insect Diagnostic Clinic received 65 samples of blue spruce this year. Twenty-five percent had Rhizosphaera needle cast disease, 12% had Spruce Needle Drop (SNEED) and approximately 10 % had spider mite infestations or were diagnosed with transplant shock problems. Interestingly, the remaining 54% were diagnosed with environmental stress problems. Spruce trees do not do well in poorly drained soils and the cold wet spring was hard on spruces throughout the state. In addition, blue spruces tend to be shallow-rooted and sensitive to infertile soil, shade, drought and winter drying. Adverse environmental conditions can lead to purpling of inner needles, needle drop, branch dieback and gradual decline of the tree. In some cases, these symptoms look quite a bit like those caused by fungal needle cast diseases. Although blue spruce is widely planted in Iowa, this tree is native to the Rocky Mountains and can struggle in the Corn Belt unless planted in locations that best match their requirements for soil, drainage, climate and exposure. If favorable planting conditions are not present it would be better to use other conifers like Norway spruce, concolor fir, white pine and arborvitae.

The wet conditions in spring and beginning of summer were also ideal for the spread of Rhizosphaera needle cast caused by the fungus Rhizosphaera kalkhoffii. A serious and common disease of blue spruce, Rhizosphaera attacks mature needles in the lower part of the tree first and then gradually moves upward. The disease causes the needles to turn purple-brown in fall and then fall off during the following spring. A characteristic of this disease is the small black spherical fruiting bodies (black dots) that are arranged in rows on infected needles (Fig.1). Disease development is favored by poor air movement and high relative humidity. Since trees that are under stress are also more susceptible to diseases, it is also important to reduce stress in trees by watering when needed and mulching the root zone with composted wood chips or other organic mulch. Fungicides that are available for Rhizosphaera include thiophanate methyl and chlorothalonil. The timing of application is important. it is recommended to spray when new shoots grow are one-half to 1 inch long in spring and re-apply three to four weeks later.

SNEED symptoms appear most severely on second year needles. At first, the needles turn yellowish, then gradually purple-brown and finally drop off, leaving entire branches bare. The distribution of symptoms is scattered on branches throughout a tree. A fungus associated with these problems was first observed in U. S. on Colorado blue spruce in Wisconsin in 1998 and identified as Setomelanomma holmii. However, its ability to cause SNEED has not been conclusively proven and its presence might only be an indication of stress. Small fungal black fruiting bodies (black dots) develop on twigs during late May and early June (Fig. 2). The best approach for SNEED control is to keep trees as stress-free as possible. 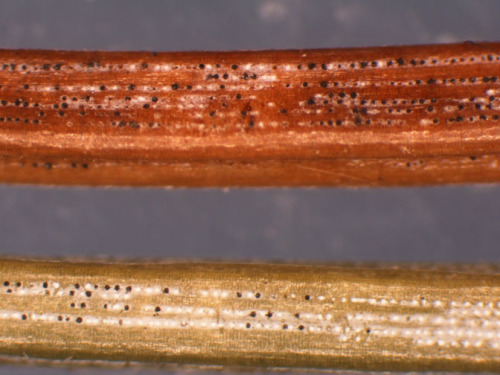 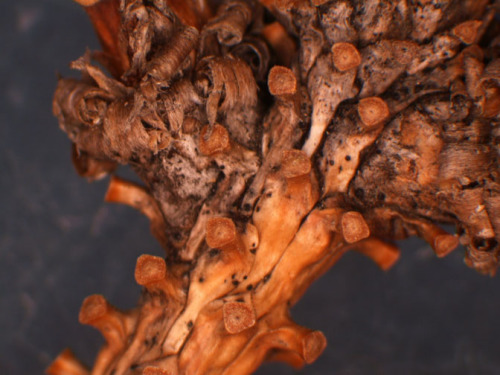 Links to this article are strongly encouraged, and this article may be republished without further permission if published as written and if credit is given to the author, Horticulture and Home Pest News, and Iowa State University Extension and Outreach. If this article is to be used in any other manner, permission from the author is required. This article was originally published on January 7, 2009. The information contained within may not be the most current and accurate depending on when it is accessed.