The magnolia scale is an occasional and widely scattered pest problem in Iowa on magnolia shrubs. Over the past 20 years infestations were reported in Des Moines west of downtown (The Art Center vicinity) and Beaverdale. This summer we have heard of infestations in Des Moines, Davenport and Jefferson.

Magnolia scale is the largest scale insect in Iowa. Sap feeding by the scales causes stress to heavily infested plants and can result in stunted growth, yellowish discoloration of the foliage and branch dieback or death of the plant. This scale insect produces large quantities of honeydew (sugary excretion) that makes the leaves shiny, and supports the growth of sooty mold, a fungus that causes the black color. Wasps (and sometimes flies, bees and even butterflies) will visit scale-infested plants to feed on the sweet honeydew. 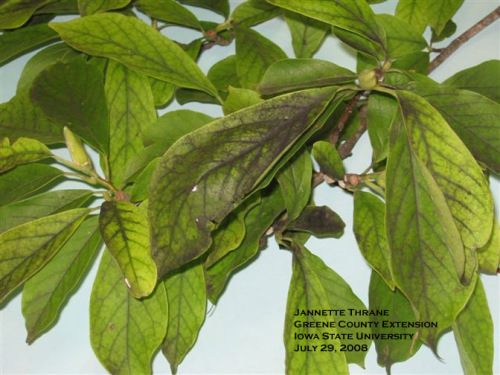 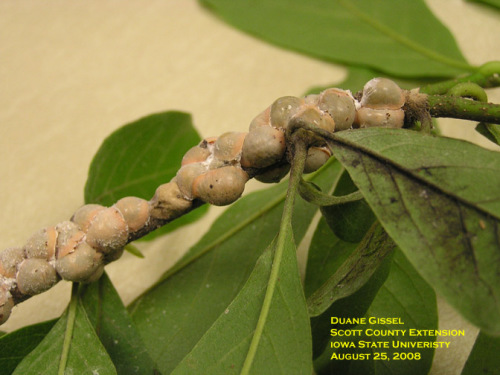 Links to this article are strongly encouraged, and this article may be republished without further permission if published as written and if credit is given to the author, Horticulture and Home Pest News, and Iowa State University Extension and Outreach. If this article is to be used in any other manner, permission from the author is required. This article was originally published on August 27, 2008. The information contained within may not be the most current and accurate depending on when it is accessed.