Spring and early summer are good times to notice the diversity of insects in Iowa and now is the time to look for and appreciate some of the giants of the class, the giant silkworm moths. Iowa does not have many truly large insects. You have to go to the Tropics to find impressively-sized insects: walking sticks the length of you forearm, moths the size of dinner plates, beetles as big as your fist.

The giant silkworm moths of Iowa are the cecropia, the polyphemus, and the luna. All of these attract attention because of their large size and bright colors. And since most people don't see them often, they get noticed when they are present. The moths fly at night so some people see them at the porch light; others notice the moths in daytime, perched wherever they stopped at dawn and where they remain all day long.

As you might expect, these large moths come from large caterpillars. Though the large, hungry caterpillars feed on the leaves of hardwood trees, there are too few to cause significant damage to the trees. These insects are not pests and no control is needed

The cecropia moth is the largest insect found in Iowa and its equally impressive caterpillar is the largest larva found in Iowa. Caterpillars are seen in late summer throughout the state on a wide variety of trees and shrubs, including wild cherry, plum, maple, willow, boxelder, apple, crabapple, lilac, walnut, elm, birch and poplar. The caterpillars spin a cocoon on tree and shrub twigs to spend the winter and the large reddish-brown moths emerge the following May or June. Moths have a wingspan of 5 to 7 inches. Among the reddish-brown and brown colors there is a white "eye-spot" near the center of each of the 4 wings.

The polyphemus moth is light brown with a wing spread of 3.5 to 5.5 inches. There is a small window-like spot at the middle of each wing. Polyphemus caterpillars feed on foliage from a wide variety of hardwood trees.

The large, pale-green luna moth with the long sweeping tails on the hind wings is easy to recognize, but one of the least common, and therefore least well-known of the group. The wing span is about 4 inches. There is a translucent spot in each wing and a lovely purplish brown stripe on the front edge on the front wing.

The silkworm moth name comes from the large silken cocoons made by the caterpillars. These are not the silkworms of Chinese dynasty fame. While the name implies that you could possibly raise your own silk from these moths, it won't be easy. And what about those mythological-sounding names? Cecrops was the legendary king of Athens and Polyphemus was the one-eyed Cyclops from the Odyssey, a reference to the one eye spot in each wing. 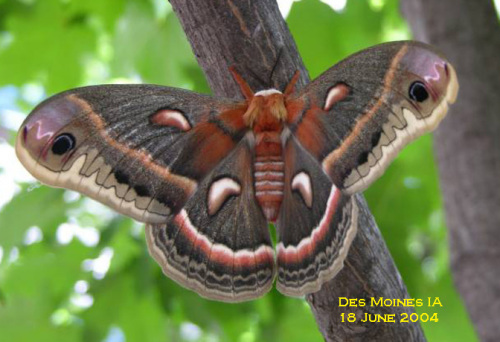 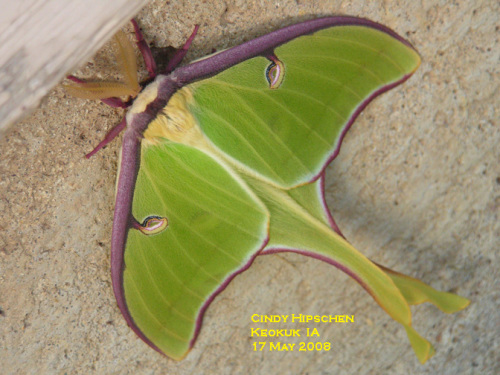 Links to this article are strongly encouraged, and this article may be republished without further permission if published as written and if credit is given to the author, Horticulture and Home Pest News, and Iowa State University Extension and Outreach. If this article is to be used in any other manner, permission from the author is required. This article was originally published on May 21, 2008. The information contained within may not be the most current and accurate depending on when it is accessed.